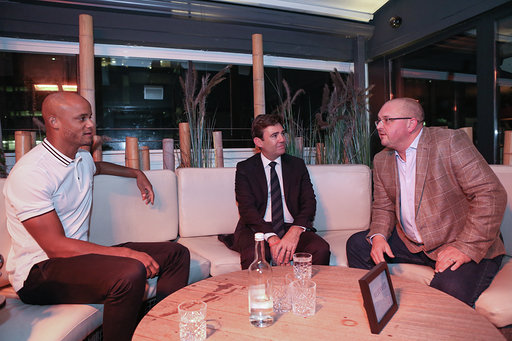 The founding partners of Tackle4MCR, an unprecedented campaign to tackle rough sleeping and led by Vincent Kompany and Mayor of Greater Manchester Andy Burnham, have been revealed.

Businesses backing the fundraising vehicle – set up to create a once in a lifetime social movement – are Workspace Design & Build, Equilibrium Asset Management, ANS, S.J.M. Concerts and Palatine.

It comes after both Manchester City and Belgium captain Vincent Kompany and the Mayor urged those ‘with a big heart for Manchester and the means to make a difference’ to become Gold or Platinum Partners of Tackle4MCR whilst launching the project in September.

The funds raised by Tackle4MCR – a special fundraising vehicle set up in the form of a limited company for one year by Andy and Vincent – will go to the Mayor of Greater Manchester’s Homelessness Fund, and more specifically the recently launched ‘A Bed Every Night’ campaign which states ‘Nobody should have to sleep rough on the streets of Greater Manchester’.

Vincent Kompany, who has pledged to make use of the momentum generated by his Testimonial season at Manchester City to assist the Mayor with one of his top priorities, said: “The commitment of the five Founding Partners of Tackle4MCR is heart-warming and sends out a powerful message about this project.

“We’re looking forward to working with Equilibrium, Workspace, ANS, S.J.M. Concerts and Palatine over the next 12 months as we aim to tackle what we have set out to do.”

This comes after Mayor of Greater Manchester Andy Burnham pledged – on his first day in office – to end the need for rough sleeping in the city-region by 2020 while also setting up The Mayor’s Homelessness Fund.

Alongside the fund and donating 15% of his salary to it each month, the Mayor established the Greater Manchester Homeless Action Network which brings together local authorities, charities, voluntary, social enterprise, faith and community organisations from across the city-region. Together they have set out their ‘A Bed Every Night’ action plan which is now live. Funds raised by Tackle4MCR will bring this plan to life.

Those who do sign up to Tackle4MCR will follow a considered approach spanning the full length of the football season, incorporating a unique gala dinner, a participative city-wide #FootballFriday campaign, with an important awareness element around rough sleeping aimed at schools, culminating in a rare testimonial gala match at the Etihad Stadium following the close of the 2018/19 season and courtesy of Manchester City.

Every penny of Tackle4MCR charity funds will be managed by the Mayor of Greater Manchester’s Homelessness Fund.  The Fund will utilise the money raised efficiently and transparently to support the ‘A Bed Every Night’ action plan.

The Mayor of Greater Manchester, Andy Burnham, said: “Tackling homelessness and rough sleeping in Greater Manchester is my top personal priority. Over the coming winter, our aim is to provide a place for every person sleeping rough, starting this month and running right through until 31 March.

“We are working hard on raising the funding we need and I am very pleased that Tackle4MCR, a project spearheaded by Manchester City captain Vincent Kompany, is backing our work. Every penny raised during this, his Testimonial year, will go towards supporting A Bed Every Night.

“I am so grateful for Vincent’s support and involvement. Tackle4MCR is just the sort of project we need to get right behind A Bed Every Night to help make it a success.”