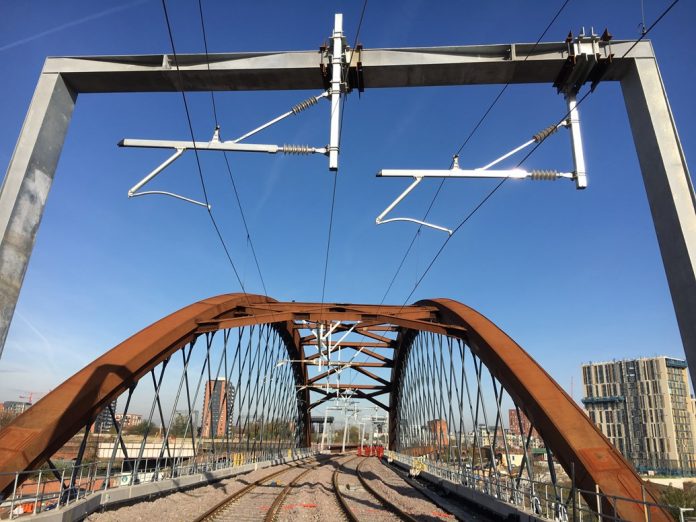 Manchester’s three main railway stations were today connected for the first time by the Ordsall Chord bridge, the historic centrepiece of the Great North Rail Project.

The location of iconic new bridge is hallowed railway turf – birthplace of modern intercity railways, where in 1830 George Stephenson’s unveiled the Liverpool-Manchester railway.

Rail Minister Paul Maynard said: “The new Ordsall Chord is a major milestone for the Great North Rail Project and forms a key part of this government’s £13 billion investment in transport in the north.

“The construction of this new iconic bridge has supported 2,000 jobs, including new apprentices and graduates and will provide new and direct links to Manchester Airport from across the region.

“By 2020, the Great North Rail Project will deliver faster and more comfortable journeys, with new trains, extra carriages and more than 2,000 extra services a week.”

The Ordsall Chord is part of the multi-billion-pound Great North Rail Project, a team effort by the rail industry to transform train travel for people across the north.

It will help create new links to Manchester Airport from across the north. By connecting Manchester’s three main stations – Piccadilly, Victoria and Oxford Road – it will reduce congestion at Piccadilly station by a quarter, allowing faster and more frequent trains to run.

The first passenger train will run across Ordsall Chord in December.

Martin Frobisher, route managing director of Network Rail, said: “The completion of Ordsall Chord is a seminal moment in the Great North Rail Project, which will transform train travel for millions of customers across the north. The old is giving birth to the new. Team Orange is mirroring the vision of George Stephenson for the benefit of the communities we serve for generations to come.”

They were joined by colleagues from train companies Northern and Transpennine Express. Representatives from Transport for Greater Manchester (TfGM), Transport for the North (TfN) and Rail North also attended alongside rail enthusiast and pop music producer Pete Waterman.

Following the tour, Mr Maynard gave a speech at an event at the Museum of Science and Industry, celebrating the completion of the chord.

#PauseTheCity: Remembering Those Lost to Suicide to Save Those Left Behind