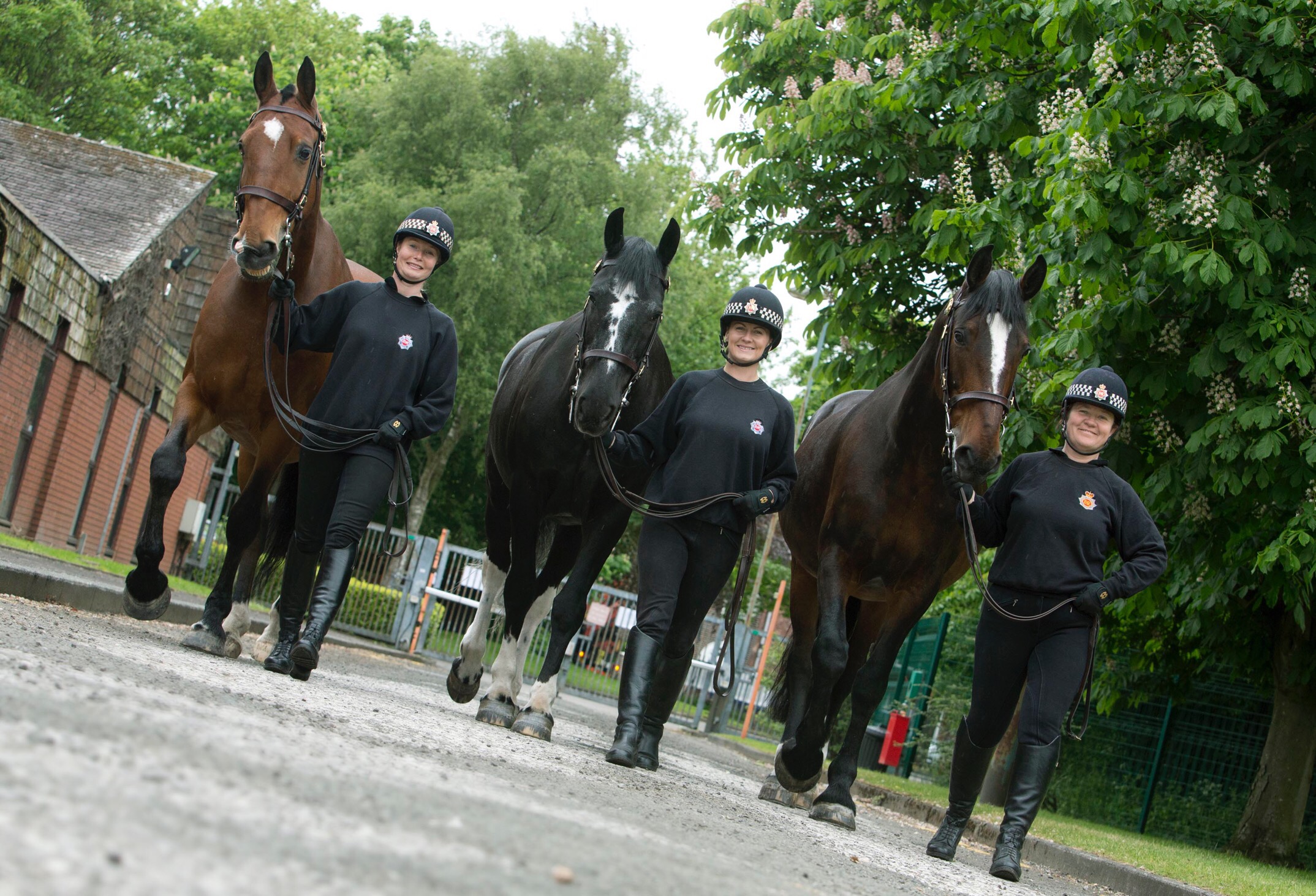 There were plenty of long faces as three of GMP’s oldest horses retired today
There wasn’t a dry eye at Hough End’s mounted unit as officers said goodbye to their four-legged partners Pip, Countess and Harvey.

Pip – a 16.2 hands-high piebald – galloped into a career with the force in 2005 and has stood his ground at everything from Manchester United home comings to parades, protest marches and riots.

Originally from Lancashire, Pip has taken his time with the force in his stride and has won over Constable Kate Guest in the process.

At the grand old age of 18, he is now due a very well deserved break where he will join Countess and Harvey in putting his hooves up in a grazing field in Goostrey, Cheshire, before eventually going to the Horses Trust in Buckinghamshire.

Countess – a 20-year-old dark bay mare – saddled up for life with GMP in 2004 at just eight years old after coming from Staffordshire. In the past year she has worked with constable Karen Danks.

Last of the trio to trot off into retirement was Harvey – a 19–year-old bright bay from Humberside constabulary who joined Pip and Countess at events across Greater Manchester with the assistance of Constable Aaron Wilson.
All of GMP’s horses are trialled for a number of weeks before they begin a rigorous training process which prepares them for life on the beat. This includes being taken out on the roads and attending smaller events to get used to crowds and traffic before policing large-scale operations.

PC Kate Guest, from GMP’s Mounted Unit, said: “All of our horses have been a huge asset to the mounted unit and their work and bravery is crucial in helping us best protect the public.

“They each have their own personality and characteristics and no two horses are ever the same.

“Pip has been the rock of the unit for so many years and he will always be my favourite. He is nicknamed the stone wall because he is not scared of anything and although I have only been in the team for a year, he has been with me since the start. He has taught me everything I know about being a mounted officer and he has always made me feel safe, no matter what the situation.

“He is the granddad of the group and can be like a grumpy old man, but once he gets to know you he is so soft and sweet and loves being scratched behind the ears. He is a one off and I won’t forget him or the work he has done during his time at GMP.”

Louis had a zest for life and his smile could light up a room.