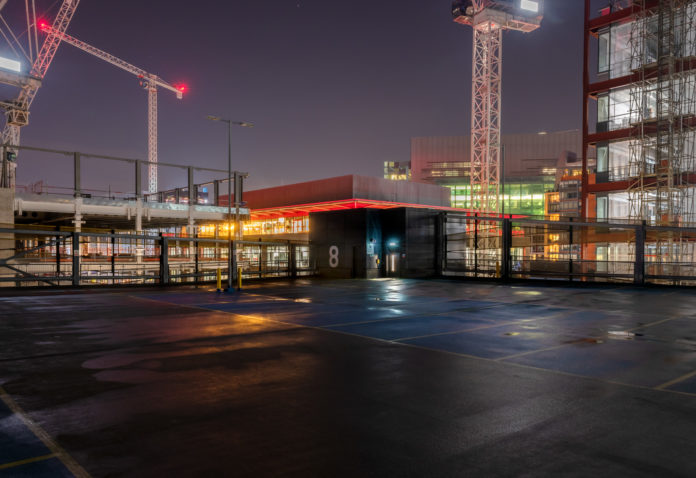 The critically acclaimed Not Quite Light (NQL) Festival returns to Salford for a third year this year (26-29 March), with the theme of “connections”.

The event will feature a range of performers, speakers and visual artists, lovingly curated by festival founder Simon Buckley, who hit the front pages earlier in 2019 with an iconic rain-soaked photograph of Manchester that many have compared to Lowry.

The up-and-coming regenerated area of New Bailey, official partner of this year’s festival, will serve as the event hub for the weekend, which aims to show a different side to the city, using all the senses.

The weekend’s events include ‘Dining in the Dark’ at Firefly, night walks, a dawn bike ride and guided blindfolded walking tours.’ We See What We Hear’ will have the audience blindfolded throughout the concert performance, held in a secret location. Other events include Disco Tesco, which will use music and food to bring together all the different nationalities in store at the Tesco Salford Precinct branch by serving food from around the world, to the music of DJs from different countries. Outdoor arts experts ‘Walk the Plank’ will be curating the Saturday night event, which will be free and open to everyone.

All proceeds from this year’s event will go to Henshaws, a local charity, which supports people living with sight loss and a range of disabilities help them to build skills, develop confidence, help each other and look forward to a more positive future.

Buckley has worked with local neighbourhoods and communities to curate the festival, using creativity and debate to explore themes of regeneration and heritage in Salford. His own artwork will be on display alongside that of painter Andy Cropper and illustrator Simone Ridyard.

Buckley says, “We decided to have the focus on New Bailey this year because it’s such a great hub for Salford. We’re really hoping that this will be a partnership that grows with the festival and with the creativity of the local community. I’ve been photographing the development of this area for the past two years and so have seen first-hand how much Salford is evolving. People forget that this part of city was mostly unused wasteland. I’m really grateful to New Bailey for their support and excited to be using the space for creative events.”

As part of the festival, students from the University of Salford will be performing their own new work as part of the ’Walk the Plank’ event and the award-winning Two Shot Podcast will be recorded live at the university on the Saturday afternoon.

“The School of Arts and Media at the University of Salford is delighted to be a part of Not Quite Light 2020,” says Associate Dean of Research and Innovation, Kirsty Fairclough. “This year the university will be hosting events in our New Adelphi theatre and offering our students the opportunity to perform alongside established creative practitioners. We are proud to be involved with such an innovative festival showcasing the wealth of creativity which runs deep throughout the city.”

Phil Mayall, regional director at The English Cities Fund, said: “What a fantastic opportunity for New Bailey to immerse itself in such a popular, eclectic festival, which reaches another new audience for us. We’re very proud to play an integral role in the event, which is supporting a great charity and we look forward to welcoming lots of new people to New Bailey to share some great experiences.”

“Salford has one of the most vibrant and progressive communities in the UK, which has welcomed the regeneration of New Bailey and really embraced it over the years. We’re honoured to have been in such a great position to repurpose this part of the city to create a meaningful legacy for the future.”

The full programme for the Not Quite Light Festival and ticket details are available on the New Bailey website: http://www.notquitelightfestival.com