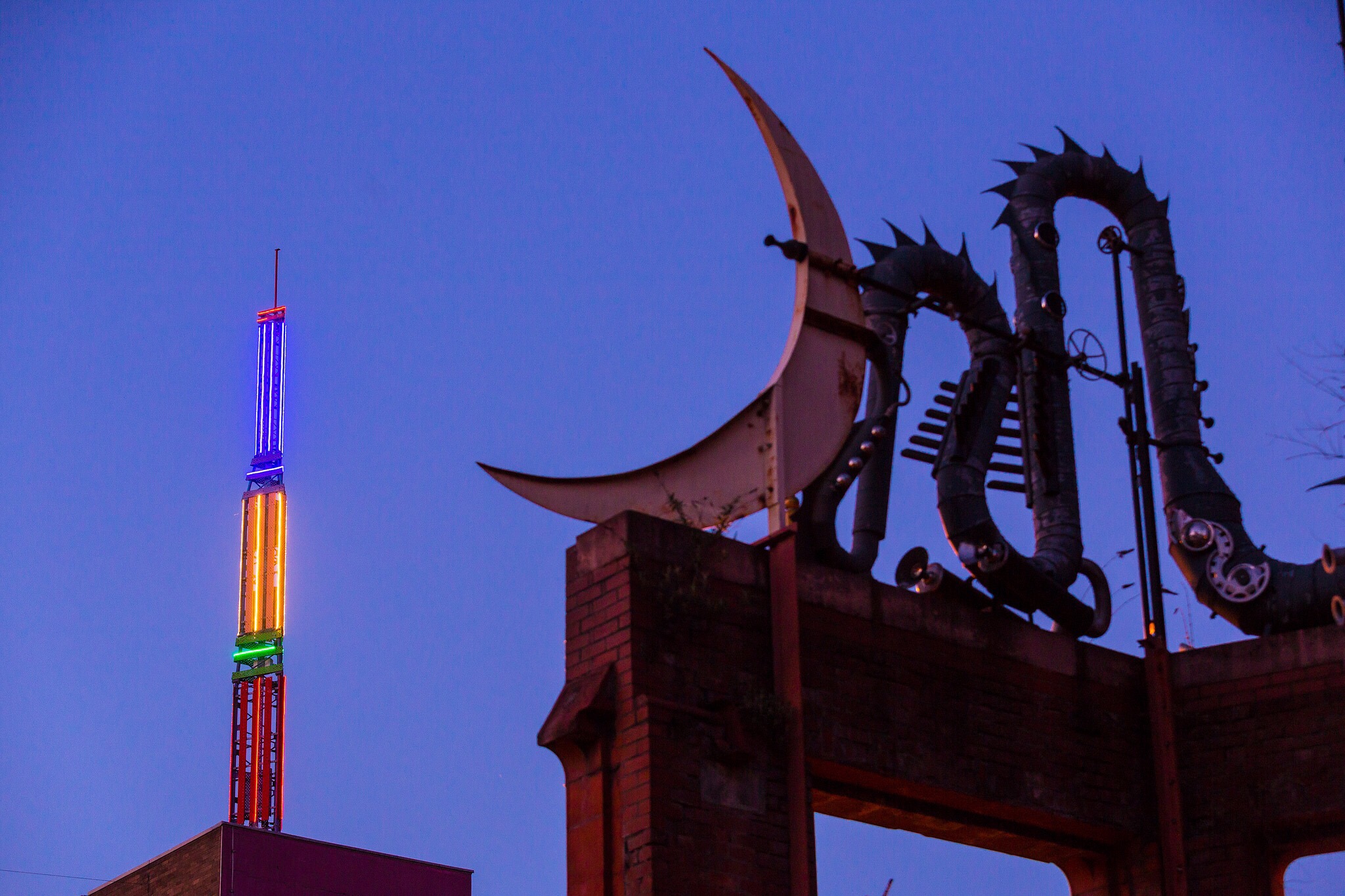 City Centre Management Co CityCo has teamed up with NCP, who lease the Church Street car park the Light Tower sits atop, and Manchester City Council, to ensure some much needed renovations were undertaken to British lighting artist Peter Freeman’s installation ‘toy boy’, which included the replacing of a number of the original neon light tubes with new eco-friendly, energy efficient LED Lighting.

This important piece of art, which was commissioned by one of the Northern Quarter’s trailblazers, Liam Curtin, was funded by The Arts Council and first switched on at the Northern Quarter Street Festival in 1999. Made of animated light tubes, the installation consists of 76 florescent multi-coloured lights, stands 12 metres high and is positioned on the red tower of the car park.

The Light Tower was switched back on in 2010 after sitting in darkness for nearly five years but in recent times, the installation had fallen into disrepair and without an agreed programme of works, would have needed to be removed permanently.

Peter Freeman, designer of the Light Tower, says; “The Northern Quarter Light Tower was one of my first public art commissions and has always been a very special sculpture for me. It was created in collaboration with Michael Trainor and the Art Department.

“The original concept for the light tower was a beacon of optimism reflecting the creative life and regeneration of the Northern Quarter. It’s wonderful that the spirit has been rekindled and the light tower is spreading its magic again.”

Liam Curtin says: “I commissioned the Light Tower in the 1996, at that time the Northern Quarter was still quite derelict but many of the buildings were being renovated and there was a feeling of a new creative quarter emerging in the city. I felt that the Light Tower would act like a beacon for the rest of the city, saying this is where it’s happening now. It also was a symbol of our regeneration as we had raised the money ourselves and lots of local people helped erect it. I’d always admired Peter Freeman’s work and there was no question that it would be his light that would shine on the regeneration of the area. I love seeing the searing colours reflected in windows and puddles all over the area. I am so pleased that it shines once again for us.”

Work on HS2 to begin by 2017 says Transport Secretary