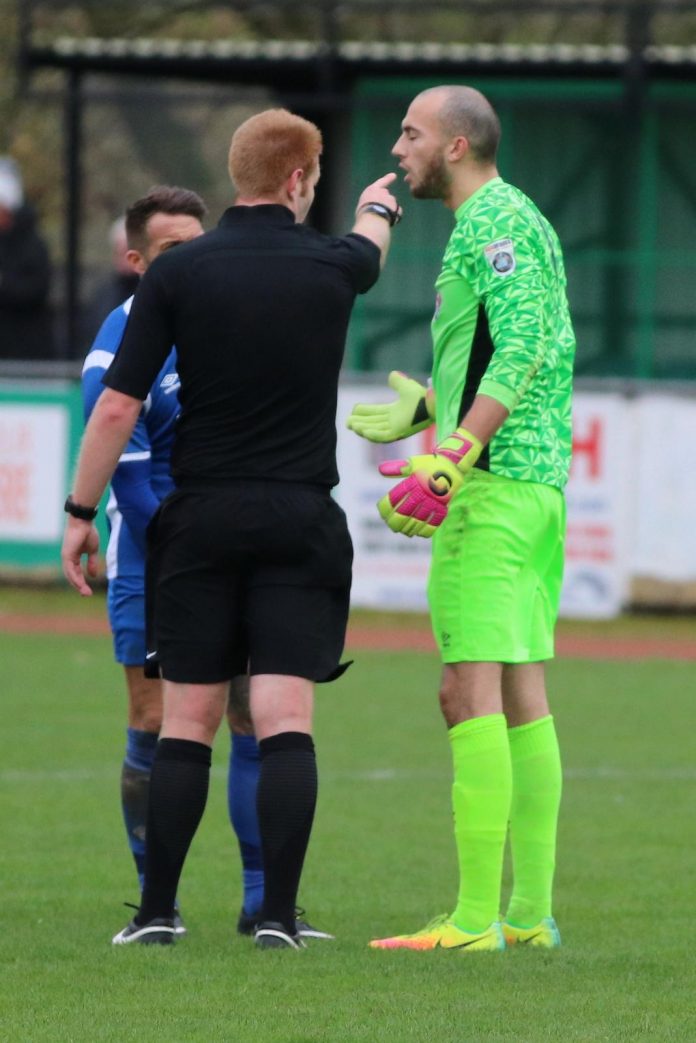 Salford City remain second in the Conference North,coming back from a half-time deficit to snatch a narrow victory over Bradford Park Avenue but the incident that had everyone talking was the late dismissal of the Ammies’ keeper Max Crocombe.

The stopper received a straight red card three minutes from time after relieving himself.

Stockport County suffered a second successive home defeat, having,as they did when hosting Blyth Spartans a fortnight earlier,initially taken a lead against Kidderminster, and subsequently approached stoppage time with the scores level before Ironside converted for the visitors.

A second half penalty was the difference between Gainsborough Trinity and Curzon Ashton, the Nash guilty of not taking their chances when they were on top.

In the first ever game without Karl Marginson FC United claimed all three points with a vital 2-1 victory at home to Nuneaton Town,the Reds have now lost just once in their last three league fixtures.

It was FA Trophy action for many of our clubs.Ashton United, Altrincham and Droylsden are all through to the second qualifying round.The Robins eased past Frickley Athletic to book their place into the next round of the FA Trophy courtesy of goals from Matthew Chadwick, Liam Tomsett, Alex Johnson and Jack Dyche.

Two goals from Tom Peers and a John Johnson strike saw Altrincham threw to the next round against Clitheroe, but the afternoon was marred by the red card shown to captain Jake Moult for comments that displeased the referee.

Droylsden are also into Monday’s draw with a 3-1 win at Ossett Town, courtesy of goals from Liam Caddick,Dom Smith and Shaun Holden.

Stalybridge must battle again on Tuesday at Bower Field after drawing 0-0 at Prescot Cables but Mossley’s participation in the competition came to an end edged out by a solitary Lancaster goal at Seel Park.

Hyde United geared uo for their Friday FA Cup tie with a convincing win in the league at bottom club Goole.First half goals from Harry Coates and Luke Porritt put the Tigers firmly in the driving seat in the first half, Khamsuk and James Burke settling the tie in the second.

Radcliffe Borough shared the points in a thrilling 3-3 draw at Skelmersdale, pegged back twice, falling behind and then went behind and then equalising in stoppage time.