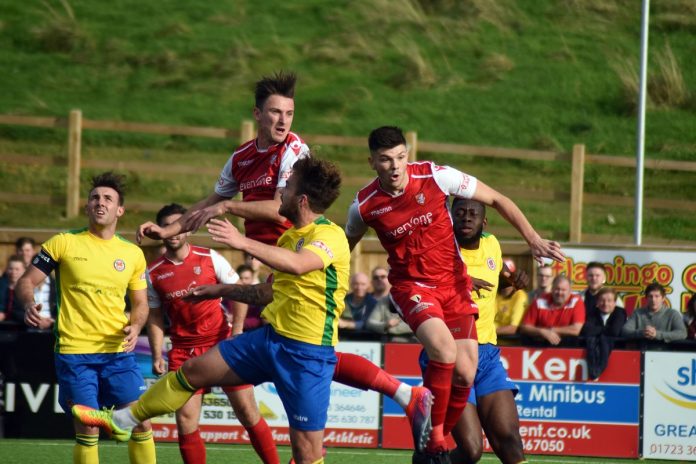 Hyde United are the only non league club in our region to be in this lunchtime’s FA Cup first round proper draw.

It is 23 years since the Tigers last made it this far in the competition and two first half goals from Matthew Beadle and Luke Porritt at Scarborough Athletic saw Hyde safely through in front of one hundred and eighty fans and officials who had made the journey.

In the Conference North, Stockport whom FC had knocked out in the last round, were defeated at Edgerely Park with two goals by substitutes in stoppage time for the visitors Blyth Spartans.Earlier Matty Warburton had converted a penalty to put the Hatters ahead, although the lead lasted only three minutes before the Spartans equalised.

In the Evo Stik Premier League, a scrappy encounter at the Marston Road ground was settled by a single strike for the hosts Stafford Rangers with 9 minutes remaining for the visit of Ashton.

They meet Altrincham in their next game and Alty are top of the league after a 3-0 home win over Halesowen thanks to three second half goals.It is the first time they have headed a league table since September 2013.

Into Division One and Droylsden threw away a 2 goal lead after new striker Ruben Jerome and Ciaran Kilheeney had give the Bloods a cushion just after lhalf time before they conceded a penalty and a last minute goal.

Mossley are a point behind them in twelth place making a spirited comeback against current Evo-stik League leaders Bamber Bridge to earn a point after trailing by two goals at the interval, Tom Dean and Danny McLaughlin getting the goals for the Lillywhites.

Trafford extended their unbeaten league run to four games with a superb 4-1 victory at Ossett Albion and are level on points with Mossley while Radcliffe Boro produced one of their best performances of the season at third Glossop coming away with a 2-2 draw, the point pulling them away from the relegation area