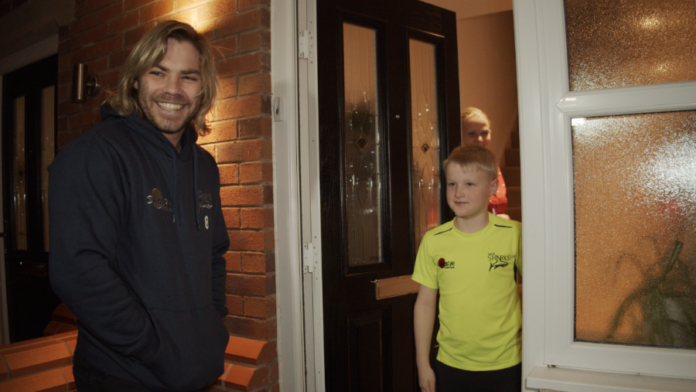 WORLD cup-winning rugby star Faf de Klerk surprised a nine-year-old super-fan by turning up at his home – and inviting him to train with Sale Sharks.

Faf, who plays club rugby for the Manchester-based team, dropped in on Wilson Harries to congratulate him on winning a competition to be its “16th man” this weekend.

The youngster was stunned to see hero de Klerk, who was instrumental in helping South Africa lift the Webb Ellis Cup in Japan earlier this year.

The scrum half invited Wilson to the Sharks’ Carrington training ground today (FRIDAY) for a behind-the-scenes look at the team’s final preparations before they take on Gallagher Premiership leaders Northampton Saints tomorrow (SATURDAY).

Rugby-mad Wilson will be treated to a tour of the AJ Bell stadium – meeting Sharks’ England heroes Mark Wilson and Tom Curry – before taking the field as a match-day mascot.

Wilson, of  Sale, said: It’s amazing. I can’t wait to meet the team and run out with Faf at the game.”

He won the experience after taking part in the Be the 16th Man competition, run by Sharks sponsor, Cheadle-based finance company Together.

The keen sports fan, who plays for Sale FC under 10s, won the competition after sending in a social media video of himself describing his love of rugby. In his winning video, he talked about his support for the Sharks and being inspired by his favourite player, de Klerk.

Mum Naomi said: “We saw the competition advertised and Wilson thought the prize was amazing so he spent time planning and making the video showing how big a fan he is. Wilson was always hopeful of winning but I didn’t really expect anything to happen so we were over the moon when we found out he’d won and he is so excited.”

A spokesman for Together said the company would be running similar competitions in the future.

Sharks defeated in 85 point thriller at the Ricoh Arena