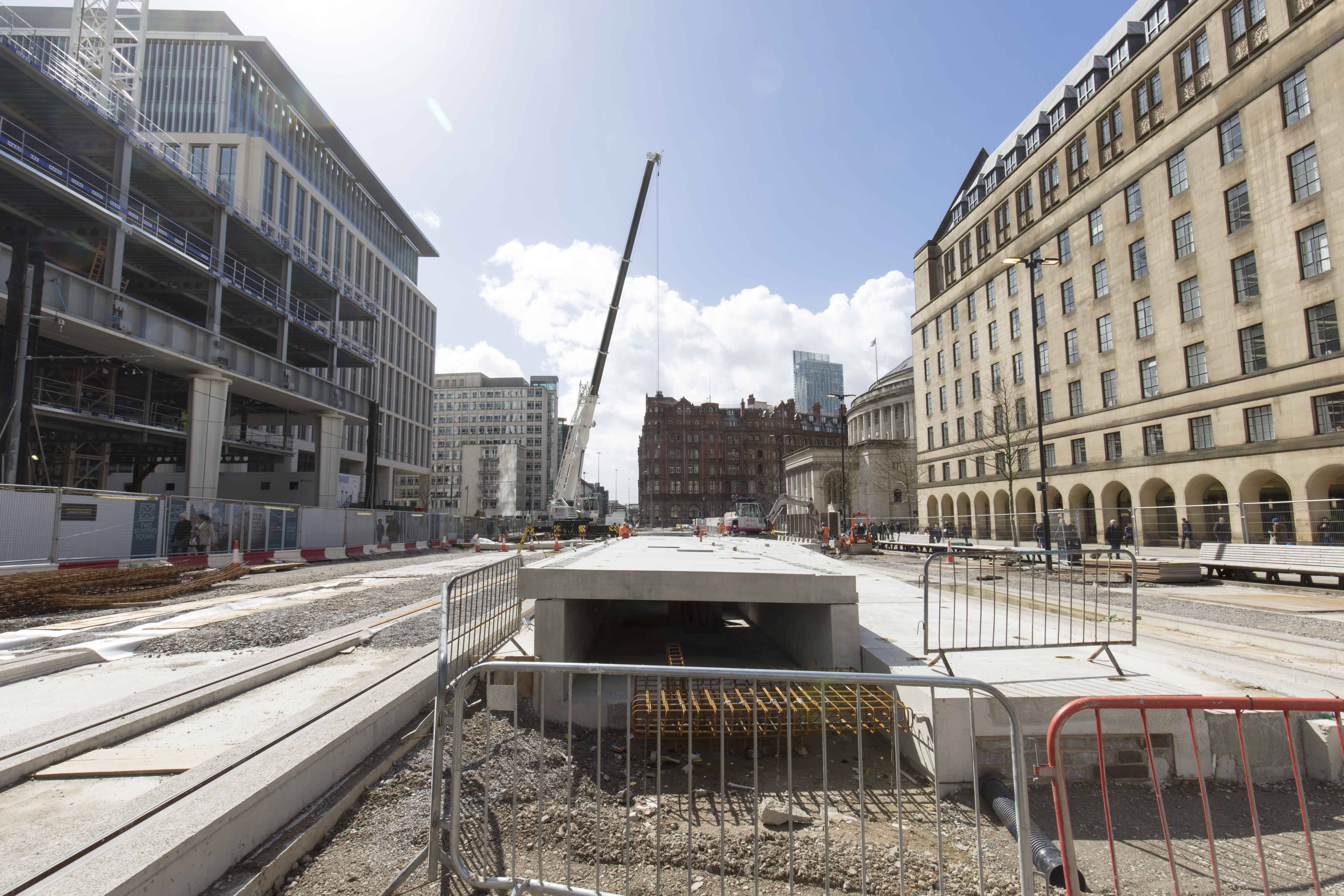 A large 90 tonne crane swung into action this week at St Peter’s Square to install the first brand new Metrolink platform.
The tram stop is being completely rebuilt as part of the flagship redevelopment of the square and is due to open to passengers this autumn.

It will join other new and transformed city centre stops at Exchange Square, Deansgate-Castlefield and Victoria as key destinations on the new £165 million Second City Crossing (2CC) tram line.

Boasting two island platforms and two sets of track in each direction, the bigger and better stop has been specially designed to allow more trams to run through the city and across the network.

The Metrolink contractor is saving time on-site assembling the two new platforms by using reinforced concrete sections pre-cast in a factory. The environmentally-friendly technique – which also improves product quality – reduces waste and plant equipment on site.
Each unit, weighing up to 10 tonnes, is being hoisted into place this week on top of the previously installed side walls of the platform closest to Manchester Central Library.

Alongside the platform construction work, coming months will see new mature trees planted around the stop to complement Manchester City Council’s flagship redevelopment of the square into a more pedestrian-friendly, livelier space for people to relax and enjoy themselves.

TfGM’s Metrolink Director, Peter Cushing, said: “The new-look stop for St Peter’s Square is really taking shape, with the track formation in place and, now, one of the island platforms well on its way to completion.

“Building a new tram stop in the middle of a busy city centre is no mean feat and our work programme has been focused on getting the work done as quickly and efficiently as possible while still keeping trams running through the city.

“St Peter’s Square is going to not only look amazing, but will be a major commuter hub when the new Second City Crossing line starts to run through it from early next year.”

He said: “This is an exciting week for our team who will shortly see the new platforms shaping up. Using Laing O’Rourke’s signature offsite manufacture approach, it only takes 5 days to lift, install and secure 46 precast concrete components that have been produced at Laing O’Rourke’s manufacturing facility in Nottinghamshire.

“This is not only a safer approach, it delivers a higher quality product, causes minimal disruption in this busy city centre location and is quicker than on site construction.”

Since August 2015, trams have been running through St Peter’s Square on a single bi-directional tram line.

Tram services will stop running through the square for eight weeks during the quieter summer period while the second platform, right next to the single tram line, is constructed and the new track formation is finalised. A major information campaign will keep passengers aware of alternative travel options.

Jailed for life for murdering his sister with a petrol bomb