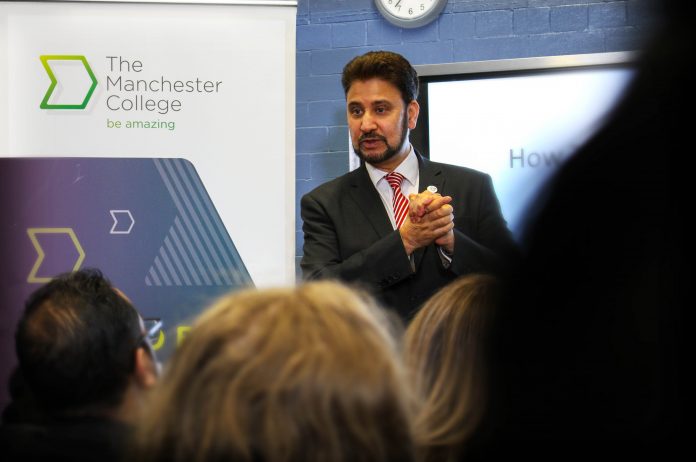 Students from The Manchester College took part in a special workshop with Manchester
Gorton MP Afzal Khan this week.

Youth trainer and facilitator Ray Douglas led the session on personal identity in relation to
being a young black and minority ethnic (BME) person living in Manchester.

He was joined by the College’s former student Afzal, who is now Labour’s Shadow Immigration Minister.

Afzal spoke to the group about his inspiring journey from being a student in north
Manchester to becoming the first Asian Lord Mayor of the city and now the first person from a BME background to represent a Manchester constituency in the House of Commons.

He said: “It was a pleasure to be back at The Manchester College and speak to a diverse
range of students who were enthusiastic and passionate about what they can achieve – both in their individual studies and also by standing together for what they believe in.

“The College is doing some fantastic enrichment work to provide its students with engaging
workshops and sessions in which they can learn and challenge each other on important
issues.”

Students asked the MP questions about his background, the challenges he has faced in his
journey and Government policies that may affect them in the future.

Vice Principal of The Manchester College Lindsey Johnson said: “It was fantastic to have
Afzal visit our College and give our students the chance to meet someone from Parliament
who studied here.

“We’re proud of our diversity and inclusivity, and our #StudentsStandTogether campaign
reflects this. We’ve run a series of events across all of our campuses designed to educate
and engage our learners about topical issues relating to hate crime awareness.”