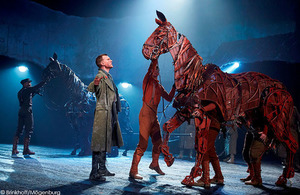 An exclusive new story by the author of War Horse will be performed to mark the centenary of the Battle of Passchendaele.

The work by Michael Morpurgo has been specially written for the national commemorations on Sunday 30 July.

His live reading of the story will be accompanied by an appearance by the much-loved horse puppet Joey from the acclaimed National Theatre stage adaptation of War Horse.

The commemorations will also feature extracts from The Wipers Times, the play by Ian Hislop and Nick Newman based on the satirical trench newspaper published by British soldiers fighting on the Ypres Salient.

Images from the War will be projected onto the town’s Cloth Hall, which was famously destroyed and later rebuilt. Recordings of interviews with First World War veterans and first-hand accounts from soldiers, nurses and loved ones will also be read out and projected onto the Cloth Hall.

A century on from the horror of Passchendaele, the nation will come together to remember the sacrifice of those who were there. This battle has become synonymous with the horrific conditions of the trenches, and the futility of the war. It is important for us to commemorate and remember not only those who never returned home from the Western Front, but the families and the communities they left behind.

The event will be preceded by the traditional Last Post ceremony which has taken place every evening at the Commonwealth War Graves Commission Ypres (Menin Gate) Memorial since 1928. As part of the ceremony, representatives of combatant nations will lay wreaths under the Gate.

On Monday 31 July, thousands of descendants of the men who fought, and those with a connection to the battle, will attend a ceremony at the Commonwealth War Graves Commission’s Tyne Cot Cemetery, the largest CWGC cemetery in the world, where almost 12,000 men are buried. Serving military personnel and descendants will read out letters and diaries from their ancestors as part of a service of remembrance to those who fought at Passchendaele.

All our yesterdays help us to comprehend our present. It is ever more important in this complex world for young people to know the roots of their history. We are inclined to take for granted our freedoms and our rights. It is easy to forget that so many of those who came before us, fought and died to defend the liberties we enjoy today.

We are now a hundred years on from the battle of Passchendaele, one of the most appalling battles of the First World War, in which thousands upon hundreds of soldiers suffered and died. It is a moment to reflect on their lives, and on the terrible nature of that war and of all wars, and on the importance of maintaining peace. They fought for our peace. That is what we must not forget, which is why we must continue to tell the story, to pass it on.

It is a great honour for the Wipers Times play to be included in the commemoration of Passchendaele. This satirical trench newspaper was born in the ruins of Ypres and named Wipers by the Tommies who could not pronounce it. It captured the defiant black humour of the British Forces in the face of overwhelming adversity. This story has gone from the Western Front to the West End, and now it is returning to where it all began.