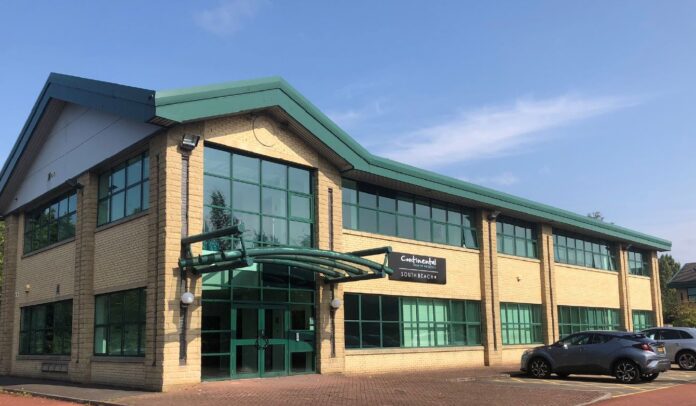 Fashion and accessories distributor Continental Textiles has moved to bigger and better headquarters to accommodate a growing team amid strong expansion for its leading beachwear and loungewear brands.

The family business has moved to an 8,000 sq ft two-storey building in Trafford Park, Greater Manchester, which it acquired from a print services company. Continental Textiles was previously based on the Longford Trading Estate in nearby Stretford.

It has now completed a refurbishment of the new HQ at Avocado Court, Commerce Way. The top floor has been converted into open-plan offices featuring three showrooms, a breakout area, and pods for quieter work spaces.

Jonathan said: “The move to larger premises was necessary as we were running out of space. Avocado Court is a massive improvement in every way and we’re very proud of our new headquarters.

“There’s a great buzz among the staff about the office layout and the facilities.

“They appreciate that we are putting a strong emphasis on wellness in the workplace and that we have invested to create an environment which sparks their creativity, is fun to work in and reflects our approach of looking after them in the best way possible.

“The team are key to our success, and everyone is excited by what we have done.”

Jonathan also said there are plans to create a photographic studio and more showrooms on the ground floor at a future stage.

The company has recently increased employee numbers to 28 with new staff in its merchandise, buying and garment technology teams.

Another addition is Jonathan’s six-month-old cavapoochon Maggie. He says the staff have taken her to their hearts.

“She is regularly taken for walks by members of the team who want to get some fresh air, she often sits on their laps and always puts everyone in a good mood,” he said.

Continental Textiles was established in 1953 by Franz and Lilly Crewe to produce silk scarves. The business has expanded to become a leading creator and distributor of a wide range of swimwear, nightwear, fitness clothing and accessories.

Its products are imported and exported worldwide. They are sold via high street stores, wholesalers and online retailers such as ASOS, Zalando, Namshi, PacSun, Forever21 and Footasylum.

Among its leading brands are South Beach and Loungeable.

Jonathan, who is the grandson of the founders, said “The business has traded well during the pandemic due to our broad range of products, and we see potential for further growth despite a very challenging market.

“When lockdown started, we saw most swimwear orders put on hold, but our loungewear and fitness ranges really took off.

“Our brands have had a strong year overall, and we have opened new accounts with retailers such as Footasylum.

“A number of brand developments are in the pipeline to continue driving the business forward, and our new offices will give us the ability to expand our team further over the next few years.”

Tim Potter and Jo Gibson, of accountancy firm HURST, and Eoin Murphy, of BBS Law, advised Continental Textiles on the acquisition of its new premises. Robert Danson at HSBC Commercial Banking arranged funding for the deal.