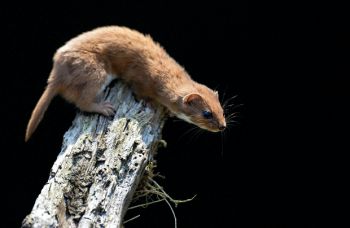 In the first study of its kind in the UK, researchers have demonstrated a worrying decline in small mammals in Britain. The species found to be the worst affected are the harvest mouse and weasel, which were found to be shrinking in occupancy (area of land where they are present) by an average of 2.8% and 4.2% each year, respectively. The scale of decline found for the weasel, which primarily feeds on voles and mice, is enough to justify it being classified as ‘Vulnerable to extinction’ under IUCN Regional Red List Criteria.

The paper, published in Biological Conservation and authored by a team of researchers from the Mammal Society, University of Sussex, and the UK Centre for Ecology & Hydrology, assesses trends of two thirds of the UK’s land mammals from 1970 to 2016. The results are based on estimating each species ‘occupancy’, which refers to the proportion of sampled areas in which a species is recorded as present.

Dr Frazer Coomber, Science Officer at the Mammal Society said: “By grouping mammal species into survey assemblages and creating detection histories from species presence records, occupancy-detection models were used to calculate the probability that a particular site was occupied and the species observed given that it was present. The proportion of all sampled sites that were estimated to be occupied could then be summed to get annual occupancy estimates.”.

One quarter of native British mammals were found to be at risk of extinction in the 2020 Red List for Britain’s Mammals, however this new study shows even further loss. While some species groups appear to be increasing (e.g. bats and deer) these new analyses highlight for the first time the declines in bank voles, field voles, water shrews, common shrews, stoats and weasels. All of these species were historically abundant, being found particularly in hedgerows, scrub and long grass.

Fiona Mathews, Professor of Environmental Biology at the University of Sussex, said: “Small mammals are critical, and usually abundant, parts of natural ecosystems. They are tiny ecosystem engineers that improve the water holding capacity of our landscapes, and are vital prey for many other species including barn owls, kestrels, stoats and weasels. The disappearance of the long grass and overgrown areas they need has taken its toll.”

The study was undertaken to reveal previously unknown species trends, which are vital to provide suitable conservation management – something that is of paramount importance to retain biodiversity.

Dr Stephanie Wray, Chair of the Mammal Society, said: “This is the ‘canary in the coal mine’ that tells us we need to act now to stop ecosystem collapse”.