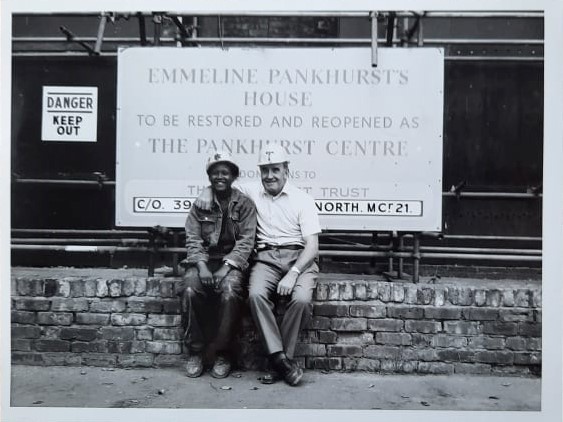 The Pankhurst Trust has been awarded funding from The National Lottery Heritage Fund to embark upon a project called Rooms of Our Own, which will reveal the hidden ‘herstory’ of Manchester’s Pankhurst Centre. Although now recognised internationally as a site of historic importance, as the former home of Emmeline Pankhurst and the place from where the suffragette movement was born, for many years the Pankhurst Centre’s significance was overlooked. It was thanks to women’s activism that the quest began in the 1970s to save the building, which faced the very real threat of demolition in 1978. This hard fought campaign, and the vision that from it led to the creation of a museum and feminist hub, has never been fully explored until now.

The activism of the people who saved this iconic site is set to connect the radical past of the Pankhurst Centre to its future. The key focus of Rooms of Our Own will be the Pankhurst Centre archive, with young people aged 18-25 working on not only precious materials that already exist, but capturing the stories and voices of campaigners from the 1970s to 2014 when the centre was merged with Manchester Women’s Aid. As it progresses the project will use the archive to inspire creativity, including the creation of original theatre, music and artwork, with lots of participatory opportunities.

Rooms of Our Own begins with an Open Day at the Pankhurst Centre on Friday 15 October to give 18-25 year olds who are interested in volunteering the opportunity to find out more. This is for anyone who would like to learn more about archiving, digital skills and recording, enabling them to collect valuable oral histories and to prepare the archive ready for deposit in its future home, Central Library in St Peter’s Square Manchester.

Claire Selby, Project Co-ordinator for Rooms of Our Own, says, “This is such an exciting project for the Pankhurst Centre and so vitally important. The Pankhurst Centre holds a special place in people’s hearts, so to think that the birthplace of the suffragette movement once faced its own battle for survival seems incredible. Many of the campaigners from the 1970s will now be in their 60s and 70s and we want to not only ensure that this chapter of history is captured, but for young people today to connect to the crucial part of Manchester’s radical history that the Pankhurst Centre represents.

“We are looking for a diverse range of volunteers and with full training provided existing archive experience isn’t necessary. But what we are looking for is young people with a passion for exploring and delving into the world of the Pankhurst Centre and the activism and campaigning that is part of its past, present and future. We are also very keen to hear from anyone who was involved in the campaign to save the Pankhurst Centre in the 1970s and 80s that we are not already in touch with, and for them to share their stories as part of the legacy that this project will create.”

The funding from The National Lottery Heritage Fund will help to secure the Pankhurst Centre archive and its content and will also take it a step closer towards achieving its vision of being a world-class heritage site, museum and activist space. This follows the summer opening of the Pankhurst Centre’s new permanent exhibition, At Home with the Pankhurst Family, which was made possible thanks to funding from AIM Biffa Award History Makers, as part of the Landfill Communities Fund. Looking to the future, the Pankhurst Trust wants to see the Grade II* listed Pankhurst Centre fully restored, which is the quest of its small team and dedicated supporters.

Rooms of Our Own Open Day will take place on Friday 15 October from 10am to 4pm, with registration in advance required. There will be the chance to meet the project team and find out more about the volunteering opportunities available and the training that comes with them, which include the payment of expenses.

Anyone who would like to share their story of campaigning for the Pankhurst Centre in the 1970s and 1980s can get in touch directly with Claire Selby, Rooms of Our Own Project Co-ordinator, via c.selby@pankhursttrust.org.