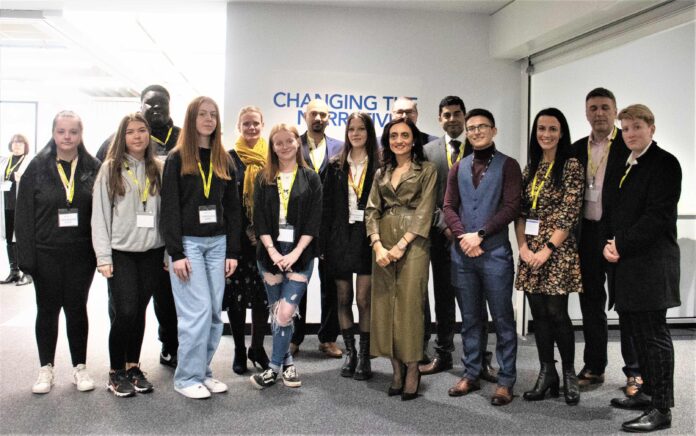 Over the last 18 months young people have been deeply affected by the impact of the coronavirus, seeing their education disrupted and their social lives diminished.

Now, as many students look to the future and start thinking about life outside of education, they are being met with a youth unemployment level of 14.6%, three times higher than other groups.

On Monday 22nd November, members of the Greater Manchester Health and Social Care Partnership and the Greater Manchester Combined Authority joined representatives from pharmaceutical company Boehringer Ingelheim and local students in Wigan to celebrate a new joint initiative. This project will equip young people with the skills and experience they will need when taking the next steps in their lives.

The initiative, Young Person Employability Partnership: Sharing Skills for Life, is designed to help young people prepare as they enter the jobs market. The partnership helps students to build resilience, develop interview skills and understand their personality types to develop entrepreneurial mindsets that will provide them with a head start when it comes to finding employment.

Warren Heppolette, Greater Manchester Health and Social Care Partnership’s executive lead for strategy & system development said, “This is a generation of people who have shown true resilience at a time when we all faced challenges that were previously unimaginable.

However, we know the pandemic has been tough on young people – so, we now owe it to them to do everything we can to support them as they begin once again to look towards the future.

This initiative is one of the ways we can do just that, helping young people understand the skills they already have and that a bright future is within their grasp. It builds on our existing Young Person’s Guarantee, and I’m sure everyone who takes part in the initiative will learn skills they can carry through their entire working life.”

Thirty students from Hopwood Hall College, Wigan and Leigh College and St John Rigby College have already taken part in a pilot of the initiative. They attended a virtual event to learn about the skills that employers are looking for, considered the talents they already possessed and learned about the career paths available to them.

Paula Nolan, Vice Principal (Students) at St John Rigby College, Wigan, added, “Observing the way in which the young people interacted and engaged with the events delivered by staff from Boehringer Ingelheim was extremely powerful.

In the space of the work experience day alone, I witnessed our young people go from being slightly unsure of themselves to speaking confidently and participating fully in the opportunities provided to them.”

The need for an initiative of this type became clear after local young people described their feelings of anxiety when talking about their experience of the pandemic. They voiced their concerns when taking part in Greater Manchester Health and Social Care Partnership’s Changing the Narrative campaign which highlighted the overlooked fact that many young people developed emotional resilience and a new set of skills during their time in lock-down.

Uday Bose, Managing Director at Boehringer Ingelheim UK & Ireland, comments, “At BI, we aspire towards a healthier world where our people and communities can reach their full potential and we believe that when we commit to improving the way we think, work and live, we can make a significant difference.

It was wonderful to work with such a motivated group of young adults and to be part of an initiative which truly focuses on their futures. Through an array of interactive sessions, students were encouraged to build their skills to help boost confidence in their prospective workplaces. I look forward to watching them flourish.”