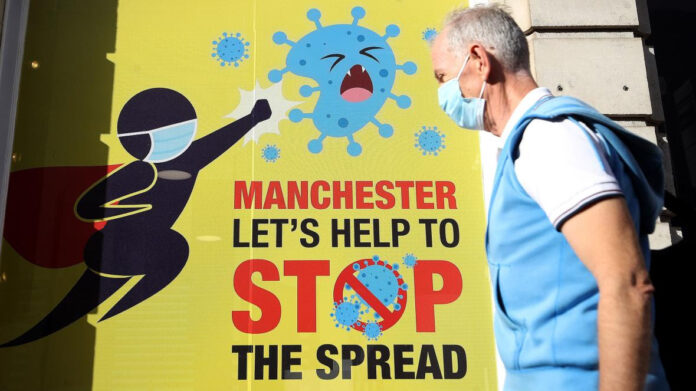 Boris Johnson is to hold a Press Conference this afternoon after reports overnight that he is considering imposing new national lockdown measures next week.

The Times this morning reports that he was expected to hold a press conference on Monday to announce the new measures, under which everything could be closed except essential shops and “educational settings”, including nurseries, schools and universities.

The new restrictions could be introduced on Wednesday and remain in place until December 1.

“ A senior government source said that the measures were under discussion and no final decision had been made. Tougher regional measures, known as Tier 4, are also being considered but ministers are said to favour a national policy. “The data is really bad,” the source said. “We’re seeing coronavirus rising all over the country and hospitals are struggling to cope. There has been a shift in our position.” reports the paper

There is to be an emergency cabinet meeting this afternoon

Downing Street has launched official leak inquiry via the Cabinet Secretary after details of the meeting meeting were leaked last night.

No 10 had wanted to hold The announcements until Monday and now having to change plans.

“ Frankly this is no way to run a country. The Prime Minister and Chancellor have been absent for a week as cases have continued to rise. We need to hear from them today about what they are planning so people are prepared and plans can be put in place.”

“A weekend of uncertainty after Government leaks plans for a national lockdown. Why are we drifting like this when Kier called Kier Starmer for a short circuit break lockdown over 2 weeks ago but this was ridiculed by Johnson & blocked by Sunak”

“ Again. Leaked information to the papers, late on a Friday night.
Operators and employees are today anxious, fearful, confused and again, a it’s huge strain on their mental health.Shambolic. This lack of leadership and uncertainty is causing so much harm.”

While Andy Burnham said simply “ Friday night, half-term, to a favoured title.
How else to make a major national announcement? “

Pay restraint is a “cruel blow” for those working tirelessly in the pandemic, says...