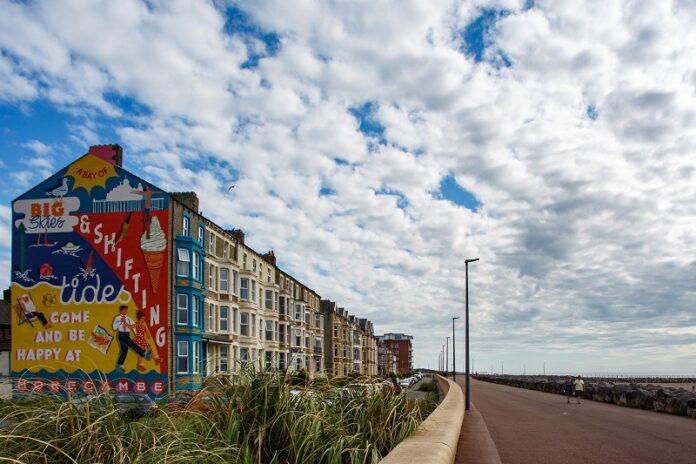 A brand new mural has been commissioned on Sandylands Promenade by culture company Deco Publique. The work pays homage to the heritage of The Wakes Weeks – a holiday period in which factory towns, particularly those in the North West, would pack up and rush to Morecambe en masse, leaving industrial towns behind.

As far back as 200 years ago, the month of June would see the beginning of a succession of summer holidays. As the mills and factories shut down for annual maintenance, nearly the whole population of a town would gather their bathing suits and their finest clothes, hair coiffed to perfection, and board buses or trains straight to Morecambe.

Today the tradition has almost completely disappeared, mainly due to the formalisation of school holiday terms. But, with the covid-19 lockdowns and the notion of staycations, there’s a new sense of connection to British Coastal resorts, Morecambe included. Like Mill Town Northerners 100 years ago, locals and tourists alike are valuing the health benefits and escapism found along the sweeping shores of our Bay.

Through a national Open Call, Morecambe-based Deco Publique invited interest from mural artists wanting to celebrate the heritage of these holiday periods, whilst also highlighting what the present-day Morecambe has to offer.

Lauren Zawadzki, Co-Director of Deco Publique says, “When our annual programme Vintage by the Sea Festival was cancelled in September 2020 we wanted to create a new artistic work that reflected what was still possible during the uncertain period we’re living through and also validated the need for creative activities when so many have been put on hold

The Wakes Week narrative follows much of the ethos of our work in Morecambe, reflecting on the heritage of the resort by presenting it in a new, contemporary way”

Glasgow-based trio Kat, Erin and Chelsea of Cobolt Collective were deemed perfect for the job, with their contemporary style and connections to the area; Kat attended Lancaster and Morecambe College to complete an Art Foundation course at the beginning of her career, and her parents both worked locally in the West End throughout their employment in healthcare professions.

Kat of Cobolt Collective says, “We were delighted to have been selected to paint a mural on Morecambe’s promenade, especially as the area means so much to me and my family and has played a pivotal part in my creative career.”

The inspiration behind the wording and design of the mural have come directly from the Morecambe community. During lockdown, Cobolt held telephone interviews and Facebook chats with Morecambe’s finest Sandgrownuns, some residents local to Sandylands Promenade, Bed and Breakfast Owners who operated in Morecambe in the 1950’s and 1960’s as well as people who currently use Morecambe’s 6mile promenade for health, well-being and recreation activities.

Erin of Cobolt Collective says, “We thoroughly enjoyed researching the rich heritage of the area and hearing more about the local history from the residents. There was a wealth of information and visuals to work with so when it came to designing the mural it was hard to select whatshould go in it!”

The design brings to life stories that were shared; from the nights spent on the promenade roller skating, to stories of going to the swimming stadium to watch the aqua lovelies and loonies perform synchronised swimming, and jump from the high diving boards. Also included is a ‘99 ice cream from the Brucciani kiosk, Fish & Chip supper, illustrations of those who take solace from the health benefits of swimming in the bay today and a local falling asleep on a striped wooden deck chair on the beach.

In addition to conversations with the community, time was spent scrolling through many archives. During this research, a series of digitally stored postcards was sourced, sent by holiday makers during The Wakes Weeks back to their friends and families in the Mill Towns of Blackburn, Burnley and Bradford to name a few. The line, ‘Come and be happy at Morecambe’ was found on one of these postcards, with another postcard stating ‘having a fine time at Morecambe’ sent from a holiday maker staying on the exact stretch of promenade that the mural is now located.

Chelsea of Cobolt Collective says, “The mural itself was a joy to paint. The views from 15m up were incredible and we witnessed a few of the famous Morecambe sunsets whilst we were painting. We have never been to a more welcoming and friendly town – that’s saying something coming from Glasgow! Each day brought more smiling faces who shouted up their encouragement and we were brought many teas, coffees and even ice creams to keep us going.”

Kat added “We hope our colourful mural will evoke joy, bring back nostalgic memories and act as a backdrop for many visitors or locals as they make new ones in Morecambe Bay for years to come.”