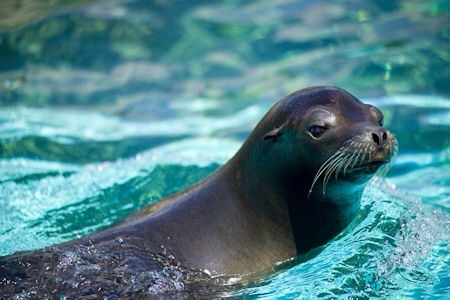 Sea lions use their hypersensitive whiskers to hunt down prey in the wild, researchers believe.

A new study from Manchester Metropolitan University has shed light on the water-dwelling mammals’ complex sensory tools, with whiskers helping the animals in more tasks than previously known.

Whiskers, also known as vibrissae, can rapidly ‘whisk’ the air 25 times every second, providing a host of sensory signals to aid balance or climb, for example.

In the first study of its kind, animal specialists from the University now believe sea lions, part of the pinniped family, use their whiskers to guide prey capture while underwater.

Blackpool Zoo keeper Alyx Milne conducted the research as part of her master’s degree at MMU with Dr Robyn Grant to study the zoo’s California sea lions, which can weigh up to 300kg and grow 2.4 metres long.

The seas lions were tested using the balls they balance for shows at the zoo, tracking their balancing techniques by HD video recorded at 60 frames per second.

Alyx said: “Previous studies have shown an observed relationship with whisker asymmetry and head rotations. We were able to show that pinnipeds move their whiskers significantly during a sensorimotor task, rather than just their head. They can use their whiskers to guide moving fish toward their mouth.”

Whisker movement respond quickly at 26.7 milliseconds and mirrors the movement of the ball more than the head. It is thought that whiskers are sensing where to direct the motion of the head to balance balls and the sea lions use similar strategies to guide fish towards their mouth.

“Somewhat synonymous with sea lion shows, no one had ever really examined how the sea lion might detect changes in ball motion to balance it successfully. We showed for the first time here that whisker movements are important during a dynamic touch task in sea lions.

“We think that whisker movements could be used in a similar way to guide prey capture underwater.”