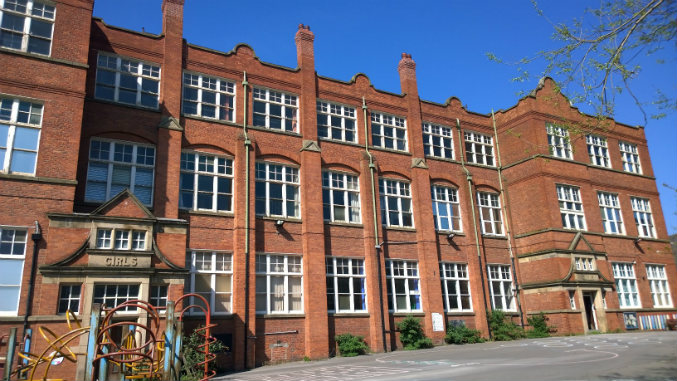 A brand new home is in the frame for the long-standing and much celebrated fine artists’ studio, Rogue Studios – a move that will see their artists literally go back to school.

Home to nearly 100 artists from all over the UK and beyond, this month sees Rogue artists back at ‘art school’ as they move from their existing building in the heart of Manchester city centre to their new headquarters in an old school in east Manchester.

Founded 22 years ago in 1995 by Colin Sinclair, a graduate of Manchester Art School, and currently run by artists David Gledhill and Martin Nash, Rogue Studios is now one of the biggest studio groups in the north of England.

Since 2000 Rogue Studios has been based at the listed but decaying Crusader Mill, occupying three floors of the building that up to that point had been entirely occupied by knitting factories.

Rogue’s growing profile since then has seen the studios expand in every direction – both in terms of the number of studio spaces on offer to an ever growing number of artists, and also in the scale and scope of exhibitions and other artistic activities it offers.

Regeneration specialists Capital&Centric acquired the semi-derelict Crusader Mill in 2015, with the aim of eventually restoring the listed structures and converting it to apartments for local residents of
Manchester. The continued expansion of the studios and the number of artists they support, along with a space no longer fit for purpose after 17 years of occupation, meant the studios needed to find a suitable new home.

When it became clear the studios needed to relocate, Capital&Centric worked closely with Rogue to keep the artists together and find a suitable replacement. After assessing a number of options, Manchester City Council’s offer of the former Varna Street Primary School building was decided as the most appropriate location.

The imposing grade II listed Victorian building with its high ceilings and mill-like appearance, has been largely empty since 2012 when Varna Street Primary School moved into brand new purpose built premises a short distance away.

Too expensive to modernise and bring back into use again as a school, the office of the Secretary of State for Education has also given its blessing for the building to be re-used as an artists’ studios. Planning and listed building consent for the change of use was obtained earlier this year following consultation with local residents.

“Re-locating them here gives the best of both worlds. It’s a unique opportunity to create a significant and lasting future for the former Varna Street School building which has been empty now for a number of years, and at the same time to secure the future of this undisputedly important fine art studio.

“It also opens up a wealth of opportunities for local people to get involved in what is sure to be an exciting new creative and cultural space in this corner of the city.”

Rogue Studios is home to artists at every stage of their career – from recent graduates to emerging, mid-career and established artists and collectives.

As an acknowledged centre of excellence in artistic production it has also acted as a magnet for artists from as far afield as Spain, China and Poland – attracting diverse and exciting creative talent to live and work in the city.

Martin Nash, co-director of Rogue Studios said: “”We’ve forged a unique model of partnership by working with Capital&Centric and Manchester City Council to find a way of securing Rogue’s future. Our new home at Varna Street is fantastic and the perfect space to enable our artists to carry on doing what they do best.

“We’re very proud of our Manchester roots and wouldn’t want to base ourselves anywhere else.”

David Gledhill, co-director of Rogue Studios, said: “We have a long tradition at Rogue for welcoming artists from near and far to come and work here, but we’re also passionate about helping nurture new talent.

“Our new home gives us long-term security and the chance to work with new partners in the development of this brand new cultural resource for the local area and the city. We’re also very much looking forward to working with the local community on a range of projects drawing on the rich history of east Manchester.”

The studios’ significant contribution regionally to Fine Art means that Rogue Studios also has funding support from Arts Council England through its National Lottery funded Grants for the Arts programme.

Jane Beardsworth, Director North, Arts Council England said “We’re delighted that such an outstanding group of artists are being supported to remain in Manchester and continue their excellent work, and congratulate the local authority on their vision in re-purposing the Varna Street building to meet a pressing cultural need, protecting and retaining talent in the city.”