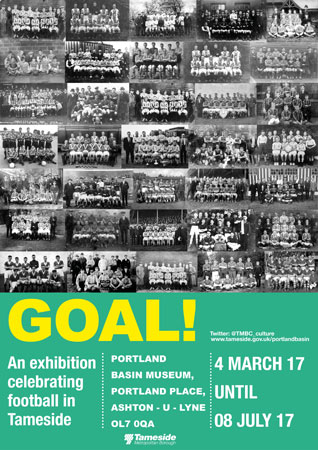 Tameside has a unique place in football. Not only is it the birthplace of three World Cup winners, it is the only borough in the country to have six senior non-league clubs playing at National or Northern Premier League level.

Goal!, the new exhibition at Portland Basin Museum, Ashton, celebrates Tameside’s love affair with the world’s most popular sport. It looks at the full expanse of the game, from its enthusiastic adoption by Victorian mill-workers and engineers to today’s heavily merchandised television experience.

Football has been played in Tameside since its earliest days. Ashton United – originally Hurst FC – were founded in 1880, less than 20 years after the FA held its first meeting, and eight years before the Football League (EFL) was formed.

Goal! Is an exhibition that really captures the excitement of football on and off the pitch. Among the exhibits are table games, match programmes, collector cards, books, balls and clothing including a replica England shirt signed by 1966 World Cup hero Geoff Hurst who was born in Ashton and lived in Denton.

As well as photographs of some of the hundreds of church, pub, works and school teams that have existed in Tameside, 94-year-old Jack Coggan has lent some pictures from his personal collection, showing Manchester United’s famous Busby Babes visiting his Stalybridge shop.

Cllr Frank Travis, Tameside Council’s assistant executive member with responsibility for culture, said: “It may be nearly 100 years since the borough had a Football League club, but the enthusiasm for the sport remains as intense as ever.

“Goal! proudly highlights Tameside’s place in football and its love for the game. It shows there is much to celebrate, and much to learn, too.”

Two busy weeks for the Hallé in Manchester

Half Term Deals Parents will Adore at The Pointing Dog Cheadle

Peace and Unity at Manchester Cathedral this weekend