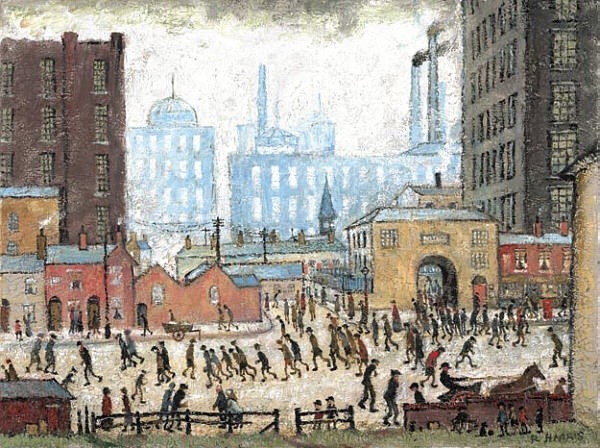 Hyde’s Brewery has marked its 150 years and a move to Salford with news ale in tribute to LS Lowry.

The Brewery teamed-up with the Lowry Centre on Salford Quays to launch six fine cask ales.

The first celebration ale from the ‘Lowry Collection’ is a 4.5% brew entitled Mill – inspired by LS Lowry’s famous 1930 painting ‘Coming from the Mill’, which features centrally to the Beer’s Branding.

The firm, one of the few British regional breweries that is still owned and managed as a family business, began in 1863 when Alfred Hyde went into partnership iwith his brother Ralph at the Crown Brewery in Audenshaw. They then moved to the Victoria Brewery, Lower Moss Lane Hulme in 1870 and to the Mayfield Street Brewery, Ardwick in 1882.

Alfred Hyde died in 1880 and his eldest child Annie ran the business moving to the Monmouth Street Brewery, Rushholme in 1887 and in July 1899 to the Queen’s Brewery, Brookes Bar Moss side formerly owned by Greatorex Brothers

Hydes Queen’s Brewey Ltd was registered in December 1912 as a limited liability company to aquire the business. The company changed it’s name in 1944 to Hydes’ Anvil Brewery Ltd, to reflect the change of brewery name

Today it has an estate of sixty six managed and tenanted pubs across the north west, producing 60,000 barrels a year.Much of the later equipment was aquired from Boddingtons also located in Manchester prior to demolition more than a decade ago

Over 150 years of brewing in Moss Side came to an end in early 2012 when the firm relocated to Salford, closing its historic Mosside Queen’s brewery