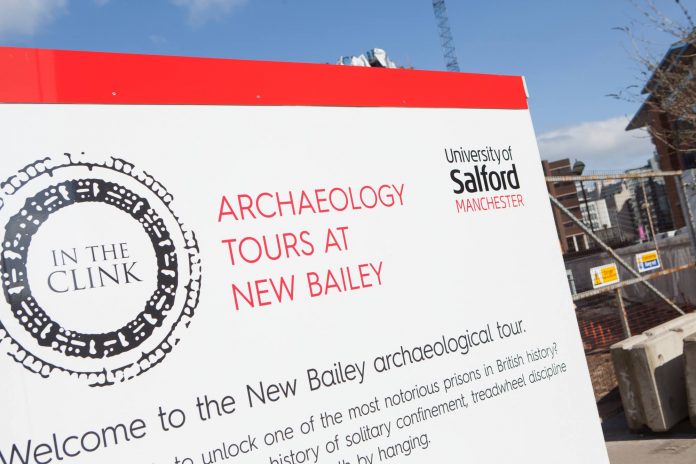 Exclusive intimate tours of the historic 18th Century New Bailey Prison are being held at the excavation site this weekend and members of the public have an exciting opportunity to take part.

On Saturday 17 November, the ‘In the Clink’ tours will be led by the University of Salford’s principal archaeologist, Adam Thompson, at the site which forms part of The English Cities Fund’s vibrant commercial and leisure district, New Bailey.

This is the second time the community has been invited to view and appreciate the remains of the old prison following an earlier excavation in 2015. Spaces for this latest event are strictly limited and those interested in attending must register to secure a valid entry ticket.

Built in the 1700s, New Bailey Prison was widely known as a tough jail, where its tenants were said to be forced to walk up to 19,700 feet per day turning the infamous treadwheel.

After the opening of Strangeways prison in 1868, New Bailey prisoners were transferred, and the redundant site lay derelict until 1872 when it was purchased and transformed into a railway yard.

Phil Mayall, regional director at The English Cities Fund, said: “We’re delighted to be able to open the site up to the community once more and invite members of the public back as we further uncover its rich history.

“Although there is a lot of history here, we’re also focussed on the future and New Bailey as it stands today has come a long way, even from the time of the last archaeological dig three years ago. The excavation site that is currently on display will eventually become the home of a new building due to start early next year, which will even more life and opportunities to the area.”

Four guided ‘In the Clink’ tours will run during Saturday 17 November between 10.30 – 14.30, each lasting approximately 30 minutes, with numbers limited to a maximum of 20 people per tour.

Face of Service exhibition at The Bury Fusilier Museum