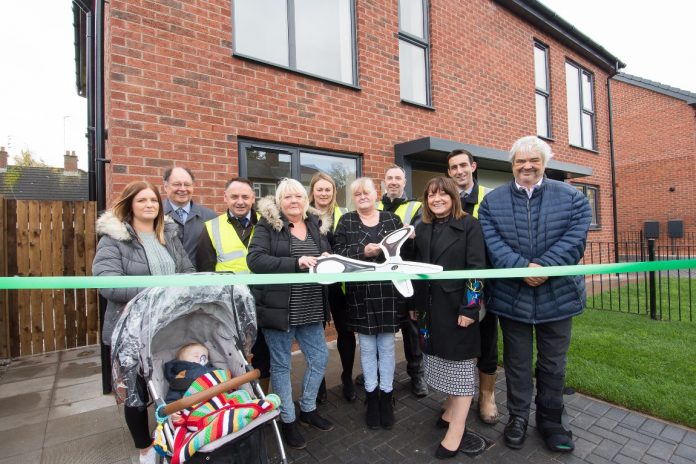 Neighbours of more than 30 years have been reunited after moving into the first brand new houses on the street they have called home for decades.

The first residents on Shakespeare Road on The Poet’s in Swinton have been handed the keys to their plush new homes after their old houses were demolished due to historic structural issues.

Resident Gail Howell has lived in the area for 50 years after first moving into Shakespeare Road, aged six, with her parents Tommy and Betty Cooper. Her four children and five grandchildren now all live close by.

Gail, now 56, said: “It was a lovely place to grow up and I have a lot of happy memories of living here. When my dad died, I took the house over, so we’re so glad to be given the chance by Salix Homes to move back – this street will always be home for me.”

Residents have been involved in the development process from start to finish with the original tenants affected by the demolition proposals temporarily re-housed close by and given priority for moving back into the new properties.

Gail, who lives her husband Paul, was chair of the residents steering group. She added: “Of course we were sad when the old houses came down, but ours was such an old house and the damp was creeping in, and now we’ve got a brand new house to move into on the street we’ve always lived.

“I love all my neighbours and I’ll still be surrounded by the people I’ve grown to know for so many years. Other than having a nice, new house, nothing will change; we will still all be together. I’m very excited to move into a brand new home.”

Resident Christine McMullan, 59, has lived on Shakespeare Road for more than half her life and is thrilled to be reunited with her old neighbours.

She said: “I’ve lived on this street for 36 years in the same house, so I’m so grateful to be moving back into a new house at a place I’ve known as home for such a long time.

“I’ll still be living by my best friend Gail who I’ve known for 35 years. We’re a very close-knit community here, we all look out for each other, and it’s very important to us that the neighbours can stay together.”

A total of 160 two, three and four-bedroom homes are being built on the estate, also known as Beechfarm, replacing 146 properties that are being demolished.

Of the new properties, 120 will be social housing, while the remainder will be affordable homes for sale or shared ownership.

Construction began in January this year, with the development being carried out in phases in order to minimise disruption.

Lee Sugden, chief executive at Salix Homes, said: “We are very happy to be welcoming back the first residents in to their new and modern homes, and it’s especially heart-warming to see old neighbours reunited.

“There is a real sense of community on the estate which we wanted to preserve with the new development. We’ve been committed to ensuring that neighbours who have formed such strong bonds over the years can continue to live side-by-side as they’ve always done; only now they’re living in new, modern homes fit for the 21st century.

“This is the first new-build development for Salix Homes so this is a very proud moment for us. At a time when social and affordable housing is in such short supply, we’re delighted that this development will bring new homes to people on the housing waiting list and provide them with a fantastic place to live.”

Resident Katie Melody, 29, grew up on Shakespeare Road having moved there with her dad when she was 15. She’s now happy to be moving back to a new home with her own two children Jenson, three, and Joshua, six months.

She added: “I’ve really been looking forward to moving into a brand new house. It’ll be great for the children because the garden is nice and safe so they can play out. Living here will make a massive difference to me and my children.”

Planning proposals have now been approved by Salford City Council for Phase Three and Four of the project, which includes the demolition and development of some properties on Stevenson Road, Tennyson Road, Kingsley Road, Wordsworth Road and Blantyre Street.