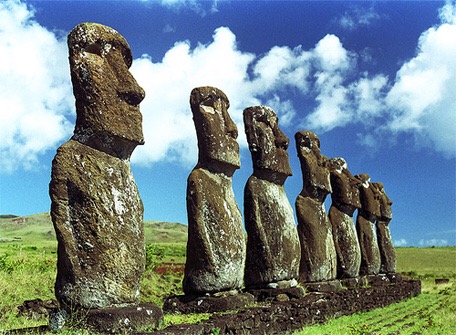 The monumental stone statues of Rapa Nui (named Easter Island by European explorers) in the Pacific are some of the most widely recognised and fascinating archaeological objects in the world.

Following recent fieldwork on the island, Professor Colin Richards, an archaeologist at the University of Manchester, is working on this new exhibition, which will take a fresh look at these impressive statues, or moai.

Making Monuments will look at how the statues and their top-knots (known as pukao) were made, the role they played in the lives of the islanders, how they were quarried and transported across the island, and what they mean. It will also deconstruct some of the myths about the island, and discuss current theories about the decline of this astonishing culture.

Ever since the Dutch visited Rapa Nui in 1722, there has been much fascination about these massive and intriguing statues. This exhibition particularly focuses attention on a relatively neglected area of moai research; the bright red scoria (volcanic rock) pukao or top-knots which adorned the moai.

The exhibition will draw on the results of recent excavations at the pukao quarry inside the volcanic crater of Puna Pau. A partial reconstruction of Puna Pau in the exhibition will give a sense of the amazing achievement of the islanders, who removed over 1000 cubic metres of scoria from the crater with stone hand-held tools.

The exhibition will explore the ceremonial and spiritual associations of the statues, which represented the faces of deified ancestors and the repositories of sacred spirits for the islanders, as well as looking at the ceremonial platforms (or ahu) on which the moai stood.

Rapa Nui has fascinated archaeologists throughout the centuries, and the exhibition investigates the work of key experts who have studied the island. These include the British archaeologist Katherine Routledge, who in 1913-14 made the first survey of the island; the Norwegian explorer Thor Heyerdahl; and Professor Colin Richards, the University of Manchester’s Professor of World Prehistory and Archaeology, who is currently investigating monumentality, as part of the AHRC-funded Rapa Nui: Landscapes of Construction project involving UCL, Bournemouth University and University of Highlands and Islands.

Professor Richards said, “Undoubtedly the massive statues of Rapa Nui have captured the popular imagination since Heyerdahl’s expedition in the 1950s. This exhibition attempts to view the monuments in a new way, exploring the qualities and significance of their composition, and in particular, an exploration of the quarry which produced the distinctive top-knots or pukao which once adorned the sacred heads of the moai’’.

Making Monuments on Rapa Nui
The Statues from Easter Island

Albert Hall Presents The Show Must Go On