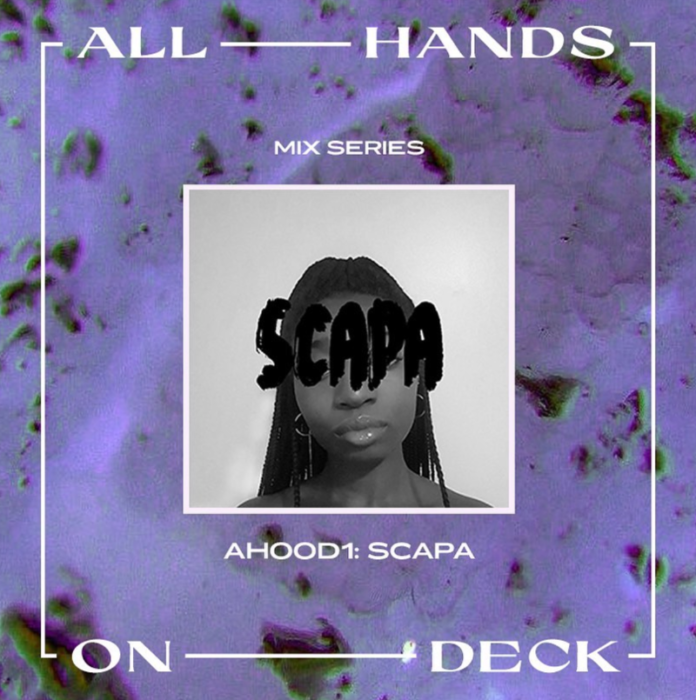 All Hands on Deck, a Manchester collective and open deck party for women, non-binary and trans DJs, have launched a mix series, with the first mix from SCAPA going out on Monday 27th July.

All Hands on Deck ordinarily call Partisan Collective their home and have been running open deck parties and workshops for women, non binary and trans DJs in Manchester since July 2018. They have responded to 2020’s lockdown by kicking off a killer mix series to showcase the talents of their collective, as well as supporters and inspirations from Manchester and beyond.

First up in the series is SCAPA with AH001D. SCAPA is a DJ and producer based in Manchester. Her mix serves as an invitation to listen to some of the tracks she has been blasting through the house during lockdown.

This collection of minimal, electro, techno and grime weaves together local icon Afrodeutsche with the likes of Travis Scott and Japanese house hero Shinichiro Yokota, capturing a wide range of SCAPA’s inspirations while starting out as a producer.

This is SCAPA’s first ever home recorded mix and comes following her lockdown releases ‘Specious’, featured on May’s BRB (Be Right Back) Sounds From The Rainy City compilation from Manchester & Salford: Save our Scene, as well as her track ‘Binary’, released on the inaugural Shifting Spheres label release; VA – Spheres of Sound: In Support of Southall Black Sisters.

Listen to SCAPA’s AH001D mix on All Hands on Deck’s Soundcloud as of Monday 27th July.