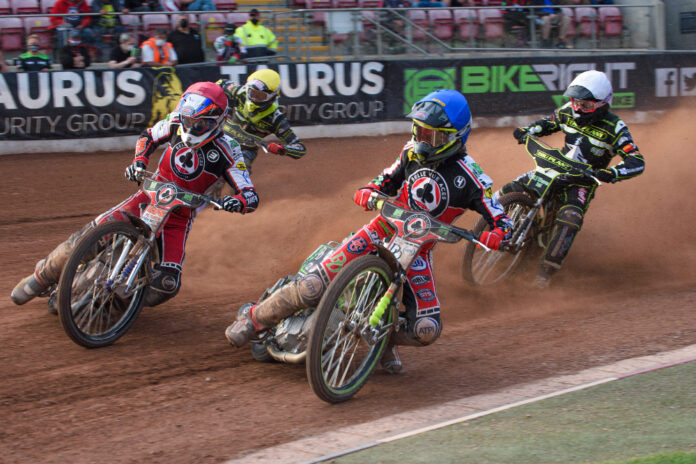 THREE of the Premiership’s top four clubs are in action on Monday, July 12 with Belle Vue taking on their closest pursuers, Wolverhampton, at the National Speedway Stadium.

It is a must-win fixture for the BikeRight Aces if they are to keep up the pressure on league leaders Peterborough, who face fifth-placed Sheffield at the East of England Arena the same night.

And the club has been boosted by the news that 2019 British Champion Charles Wright will take his place in the 1-7 after a heavy crash at Ipswich last Thursday.

Though he withdrew from that meeting on medical advice, he made it to the tapes for Championship side Redcar 24 hours later, for whom he scored 12 points.

Wright is confident his team can impress on home soil ahead of the so-called ‘Freedom Day’, when it is hoped that most remaining coronavirus restrictions can be lifted in England.

Wright said: “I’m good to go for Monday. I knocked my shoulder at Ipswich and it’s something I’ve had a few previous problems with, in terms of injury, and I aggravated it in the crash.

“I wanted to carry on but I knew it would’ve put my next few meetings in jeopardy if I knocked it again, but it feels much stronger now and I’m ready to get back out there.

“I feel this is a must-win match for us. It’s been a while since we rode at home and Wolverhampton are a very tough side; they’ve got great strength in depth just like we do

“But we’ve all been keeping busy with our other clubs and we know what we have to do at the NSS, there’s no amount of time can pass that would compromise how we ride it.

“It will be a real test for us. We’re evenly-matched on paper and I think that the starts will be crucial, for us in particular, but I know we can get the result we want.

The BikeRight Aces return to action in Manchester on Monday, August 2, with the Cool Running Colts picking up their home campaign against the Eastbourne Seagulls on Friday, July 23.

Ticket information regarding all remaining fixtures for 2021 will be communicated once the UK Government have confirmed the final details pertaining to ‘Freedom Day’.