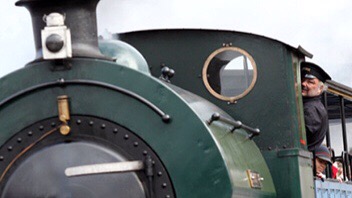 It’s all aboard for visitors at the Museum of Science and Industry this Easter, as a new 1830s steam train experience leaves the station for the first time this Friday.

Experts in period costumes will be guiding guests through the story behind the world’s oldest surviving passenger train station, as visitors enjoy a trip back in time to 1830 – when the Liverpool to Manchester railway first opened.

Curators at the museum have researched and crafted the story of the opening day of the railway, and the enormous effects it would go on to have in the industrialised world.

The 1830 Express will introduce the various travel classes of the Georgian period, as passengers wear period hats and are presented with the kind of fruits and vegetables that, via the newly opened railway, found quick transport from the Liverpool docks to the growing sprawl of industrial Manchester.

A team of rail volunteers will drive the museum’s famous trains Agecroft No 1, and Planet, a replica of Stephenson’s epoch-making Rocket, with each ride carrying up to 50 guests at a time.

The new ride sets off seven times a day on Saturdays, and six times on Sundays and holidays, including Bank Holidays. Tickets cost £4 for adults, £3 for children and £12 for a family ticket (2 adults and 2 children).

Director of the Museum of Science and Industry Sally MacDonald said: “We are delighted to be taking new passengers on an historic train ride quite unlike any other in the country “Steam trains have been a popular feature of the museum since it opened on this site in 1983. Now we are using them to bring the story of our historic site to life through a vivid and entertaining performance.”

The new 1830 Express is a highlight of a special Easter programme called Power, a host of events and activities aimed at families over the holidays (25 – 28 March, and 2 – 17 April).

In the 1830 Warehouse, youngsters will be getting to grips with Crane Construction: Under Pressure, as they use air pressure to build a simple lifting machine they can then take home.

Visitors will get the shock of their life at the interactive Circuit City show, a 25-minute show that races around the power grid of Manchester, with the help of a giant hairdryer and a radio hat.

On top of that electrifying show comes Control It: Create a Circuit – which takes young gamers through the internal workings of their favourite game controller – and gets hand on in a circuit making workshop.

And of course the ever-popular live Engine Demonstrations will continue to enthral visitors, who can experience the sounds and smells of a variety of water, steam, gas and diesel engines, depicting 300 years of Mancunian power.