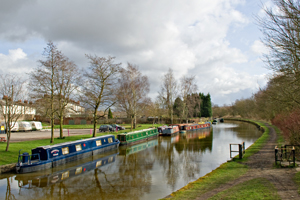 A 21 year old man has been arrested on suspicion of murder after the body of a man was found with multiple injuries in a canal in Leigh.

The body thought to be of a man in his 30’s was found in the Leeds and Liverpool Canal near King Street.

A scene remains in place and enquiries are ongoing to ascertain the full circumstances surrounding the incident.

A 21-year-old man has been arrested on suspicion of murder. He remains in custody for questioning.

Detective Chief Inspector Liz Hopkinson of GMP’s Major Incident Team said: “Sadly this morning a body was recovered from the Leeds and Liverpool Canal and our thoughts are firmly with the family of the man who has tragically lost his life.

“Our investigation is currently in its initial stages and our team are exploring all available lines of enquiry. We understand that incidents of this nature can be distressing for the community and I want to reassure the public that we are doing all that we can to establish the full circumstances surrounding the incident and identify those responsible.

“We will have an increased police presence in the area and we encourage anyone with any concerns or worries to speak with our officers.

“We’d also urge anyone with information or who may have witnessed anything suspicious in the area last night or early this morning to get in touch with police as a matter of urgency.”

Bolton woman jailed for 15 years for her part in murder of Salford University...