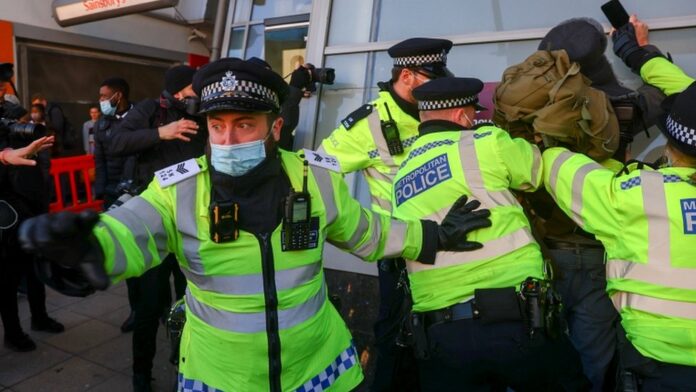 More than 60 MPs and Peers have signed a letter to the Home and Health Secretaries by Liberty and Big Brother Watch demanding lockdown rules be amended to safeguard our fundamental right to protest.

In a letter sent yesterday, lawyers at the human rights and civil liberties groups warned that allowing the police to criminalise people for protesting is “not acceptable and is arguably not lawful.”

The Policing, Crime, Courts and Sentencing Bill passed the first stage of Parliamentary process on Tuesday.

The Bill threatens the right to protest and contains a range of threats to marginalised communities.

As MPs were voting, thousands gathered to protest the Bill, and police made arrests, including independent legal observers, according to Black Protest Legal Support.
Opposition to the Bill also included a joint letter by Liberty and Friends of the Earth, signed by over 250 charities and campaign groups, and a separate letter signed by over 700 legal academics. More than 20,000 people signed Liberty’s petition against the Bill in the first 48 hours of it going online.

Recent days have seen protests against both the Bill and the aggressive policing of the recent vigil for Sarah Everard. The rights groups warned that the “shocking scenes” at protests in recent days were “entirely avoidable” if the Government had provided guidance to police and ensured protests were clearly exempt from the ban on gatherings under lockdown.

Sam Grant, Head of Policy and Campaigns at Liberty, said:

“We must all be able to stand up to power and have our voices heard. In a healthy democracy, protest is a critical way we can fight for what we believe in.

“The Government’s current quasi-ban on protest is completely unacceptable.
“Last week, the police conceded protest is not banned under the lockdown regulations, but used them to threaten then arrest demonstrators anyway.

“The Home Secretary must immediately issue guidance to all police forces to ensure socially distanced protests can go ahead and create an explicit exemption for protest in the current regulations.

“Those in power have made clear that they want to silence dissent and drastically curtail our right to free expression. In seeking to renew the Coronavirus Act next week they will threaten our right to protest in the near future, while seeking to pass a Policing Bill that will make these threats permanent.

“Using short-term restrictions on protest to stifle dissent while they pass permanent ones is as absurd as it is authoritarian. Now is the time for us to come together to stand up to this aggressive and egregious use of power.”

“A country cannot be described as a democracy if people do not have the freedom to protest.

“We have campaigned throughout the past year for Ministers and the police to respect the rights of people to peacefully and safely demonstrate.

“The harrowing scenes of police officers using force against women at Clapham Common recently were avoidable and wrong. Over the past week, many more demonstrators and even legal observers have been arrested or fined.

“This stain on our democracy is a direct consequence of this Government’s disrespect for the most basic of British democratic freedoms.”

Jailed-Levy couple who lived a lavish lifestyle funded by money laundered from a drug...

30 year old woman suffers serious injuries after being hit by a car in...