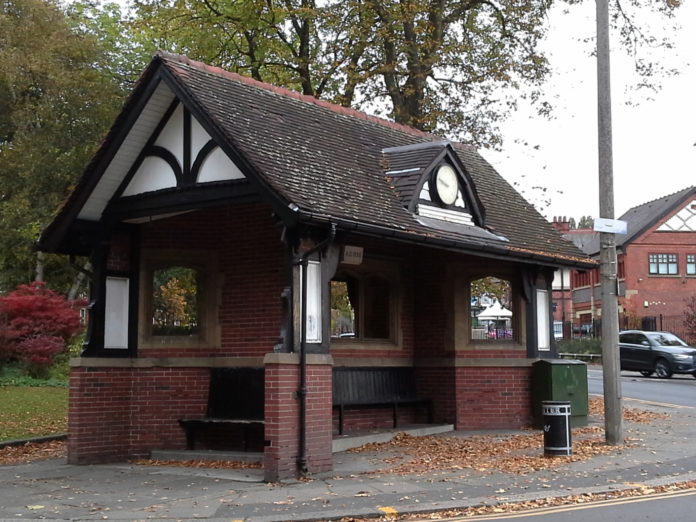 A Monton landmark is to be restored thanks to funds from the National Lottery Heritage Fund. The bid, which was successfully made by Monton Village Community Association in partnership with Salford City Council  is worth nearly £25,000.

Thanks to National lottery players the Veterans Shelter aka ‘Old Man’s Shelter’ which stands on Monton Green and dates from 1930, will undergo a much-needed facelift. A new history board revealing the origins of the iconic shelter will also be installed and a programme of walks, talks and events is planned.

The official title of the Veterans’ Shelter leads many people to think it was built as a war memorial but the name actually refers to veterans of industry. The community request  back in 1928 was simply to give older people in the village somewhere sheltered to sit and chat.

The request was turned down on its first application but the Reverend Albert Fox of St Paul’s Church, Monton, threw his weight behind the proposal and persuaded Eccles council that it was needed. The applicants had in mind a structure where 25 to 30 people, mostly retired workers from all the industry around Monton, could meet but the borough surveyor designed something more like a shelter for a seaside promenade and this was built at a cost of about £25.

In 1936 the Mayor of Eccles, Councillor John Speakman used the shelter to read the proclamation of the abdication of King Edward VIII, which was also read from the steps of Eccles Town Hall and at Peel Green.

Reverend Fox, who became vicar of St Paul’s in 1918, died in 1937 after collapsing at the wheel of his car while taking his driving test aged 63.

Liz Harris, chair of Monton Village Community Association (MVCA) said: “We’re delighted with the grant from the Heritage Fund which was secured in partnership with Salford City Council. Our community looks forward to seeing our unique shelter given a new lease of life.”

Councillor David Lancaster, lead member for environment and community safety, said: “The Veterans’ Shelter has served Monton for nearly 70 years and this work will preserve it for many more years to come.”

Radical, long-term education and skills reforms and investment are needed to address current and...