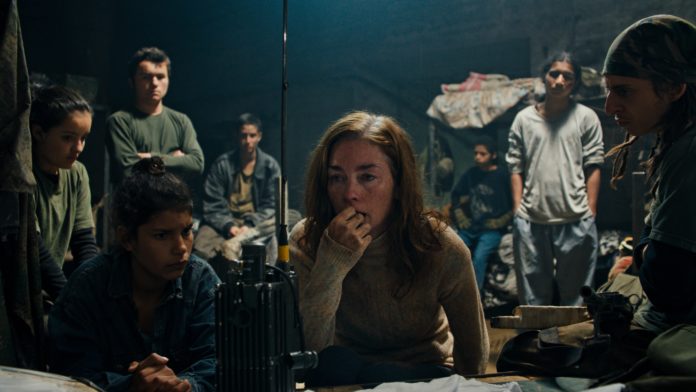 The award-winning and critically acclaimed MONOS, directed by Alejandro Landes, arrives at the HOME cinema today.

In a remote mountain top setting somewhere in Latin America, a rebel group of teenage
commandos bearing noms de guerre like Rambo, Smurf, Bigfoot, Wolf and Boom-Boom perform military training exercises while watching over a prisoner  (Julianne Nicholson) and a conscripted milk cow for a shadowy force known only as The Organization. After an ambush drives the squadron into the jungle, fracturing their, the mission begins to collapse.

Director Alejandro Landes (Porfirio, Cocalero) examines the chaos and fog of war from the
unique perspective of adolescence, banding together a diverse young cast of seasoned
professionals (including Hannah Montana’s Moisés Arias) and untrained neophytes thrust into an unforgiving, irrational and often surreal environment where anything can happen, even peace.

When asked how the project came about Landes said, “There has been a seemingly endless civil war in Colombia, a war with many fronts: paramilitaries, guerrillas, Narcos, the government, foreign actors and everything seems to be coming to ahead. The fragile possibility of peace is in the air, and it’s been a long time coming. Monos explores this moment through the prism of the war movie. Though this is my generation’s first chance, this is not Colombia’s first peace process and so it feels plagued by ghosts. These ghosts inspired me to shape the film like a fever dream.”

You can view the booking page from here.