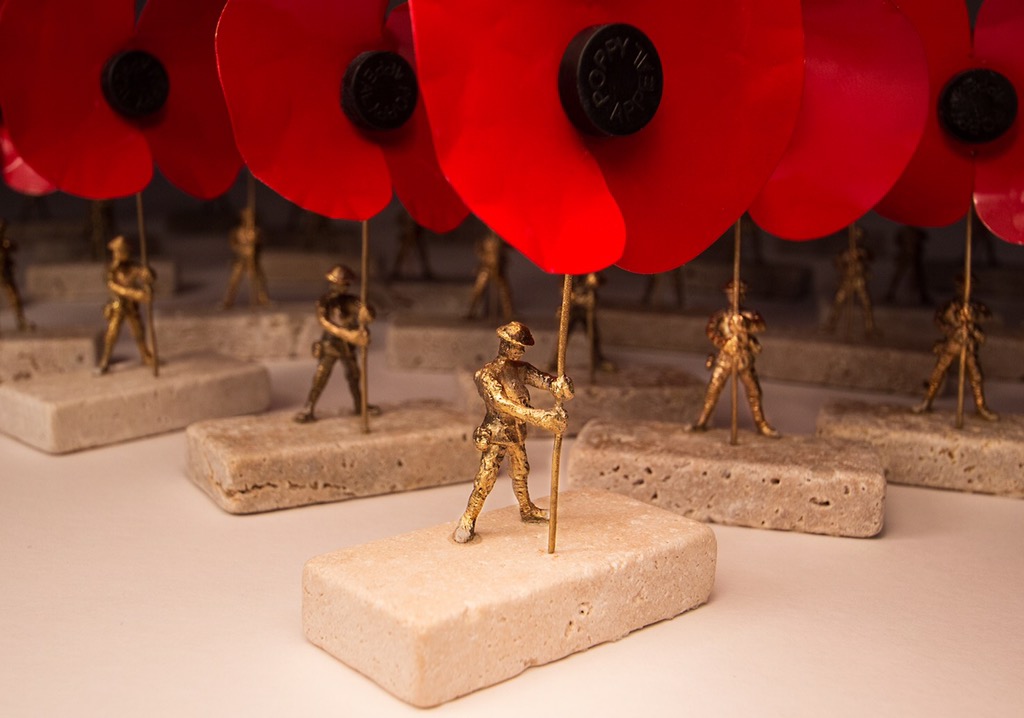 Innovative British artist Nic Joly, who specialises in creating miniature sculptures, has launched the ‘141 Days’ project to commemorate the 100th anniversary of the Battle of the Somme.
Referencing the amount of days the battle spanned, ‘141 Days’ will see 141 golden figures holding red poppies – standing at just 50mm tall – placed on war memorials nationwide, and overseas in countries which also contributed to the war effort.

From London to Liverpool, Edinburgh to Exeter and every corner of the UK, the tiny sculptures can be found on war memorials in secret locations from 7am on the 1st July 2016 – 100 years after the start of the Battle of the Somme.

Three sculptures have been placed in Manchester as a reminder of the lives lost in this devastating battle – Nic is urging the public to seek out their local war memorials to try and find the poignant sculptures, and is encouraging people to share messages and pictures on social media once they are discovered.

By the end of the first day of the Battle of the Somme, 19,240 British soldiers had lost their lives and the casualty figure was an overwhelming 57,470. 1st July 1916 saw the highest number of casualties suffered by the British army in a single day and it is widely acknowledged as the worst day in British military history. By the time the Battle of the Somme had ended, more than a million men from both sides had died or been injured.

Nic Joly – who was featured on BBC One’s The One Show on Wednesday 29th June speaking about the ‘141 Days’ project – said:

“Many of the soldiers who had signed up were everyday young men from close-knit communities across the UK who subsequently suffered horrible losses. These patriotic volunteers were sold on the romance of war, “Your Country Needs You”, and became known as the ‘Pals’ battalions.

“The ‘141 Days’ installation is about awareness, making people stop, remember, and think about what happened 100 years ago. Each one of these sculptures represents the friends, neighbours and colleagues who signed up together on the promise they would serve alongside each other.”

Nic’s career as an artist begun unexpectedly – he started sculpting as a hobby, crafting the miniature characters out of clay, paper and wire to hide around his home for his children to find. He was soon signed to art publishers Washington Green Fine Art, which owns the UK’s leading group of retail art galleries, Castle Fine Art, and is now one of the country’s leading contemporary artists.

A keen supporter of the Armed Forces, Nic also launched the ‘Never Forgotten’ project in 2014 in collaboration with Castle Fine Art. To mark the 100th anniversary of the outbreak of the First World War, Nic created 1,566 wall sculptures, reflecting the number of days that the War was fought. Each piece costs £695, and £100 from each sale will be donated to The Royal British Legion. So far, Nic has raised in excess of £45,000 from the sale of his ‘Never Forgotten’ pieces, and is working towards his goal of raising £150,000 for the Legion, with signed limited editions still available to buy from Castle Fine Art galleries.

“Nic is one of today’s most innovative artists and demand for his work is rapidly increasing across the UK. His dedication to raising awareness to the sacrifices made by the Armed Forces through both his ‘141 Days’ project and ‘Never Forgotten’ piece is extremely admirable and we are very proud to be working with him.”

Working parents in Wigan to be amongst first to get 30 hours of free...