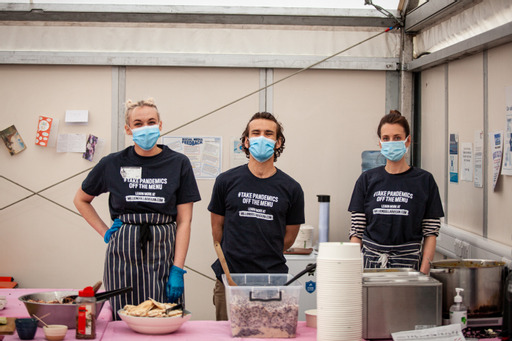 On the 25th & 26th March, international NGO Million Dollar Vegan donated 300 meals to the Manchester vaccination centre to say thank you to the staff and volunteers.

Million Dollar Vegan – the NGO best known for offering a $1 million donation to charity if Pope Francis went vegan for Lent – is on a mission to distribute one million free plant-based meals before the end of the year. Its recipients to date include families in the slums of Mumbai, Maasai communities in southeast Kenya, and households displaced by the explosion in Beirut.  Now, Million Dollar Vegan would like to show its appreciation to staff and volunteers at the Greater Manchester vaccination centre by offering them a free, delicious and nutritious plant-based meal.

The compassionate food relief program is aimed at directly supporting those affected by the Covid-19 pandemic, while at the same time highlighting the risks of animal agriculture to the climate and to public health.

With three quarters of all emerging infectious diseases coming from animals, and pandemic experts expressing serious concern about the dangers of intensive poultry and pig farms, Million Dollar Vegan is working to raise awareness and encourage people who have the choice to opt for plant-based foods and to #TakePandemicsOffTheMenu.

Animal agriculture is also a key driver of climate change, deforestation, species loss and pollution, with Oxford University environmental researchers concluding that eating vegan is the ‘single biggest thing’ we as individuals can do to help the planet.

“What we choose to buy and eat has profound consequences on the world around us. It affects both our short-term and long-term health, the health of our planet, how long we will have workable antibiotics, when another pandemic will come, and whether we will be able to slow down climate change. These are the biggest issues we face, but we are not helpless. Every one of us who is privileged enough to have food choices can play a part in protecting ourselves, our planet and our future, simply by opting for more plant-based meals.