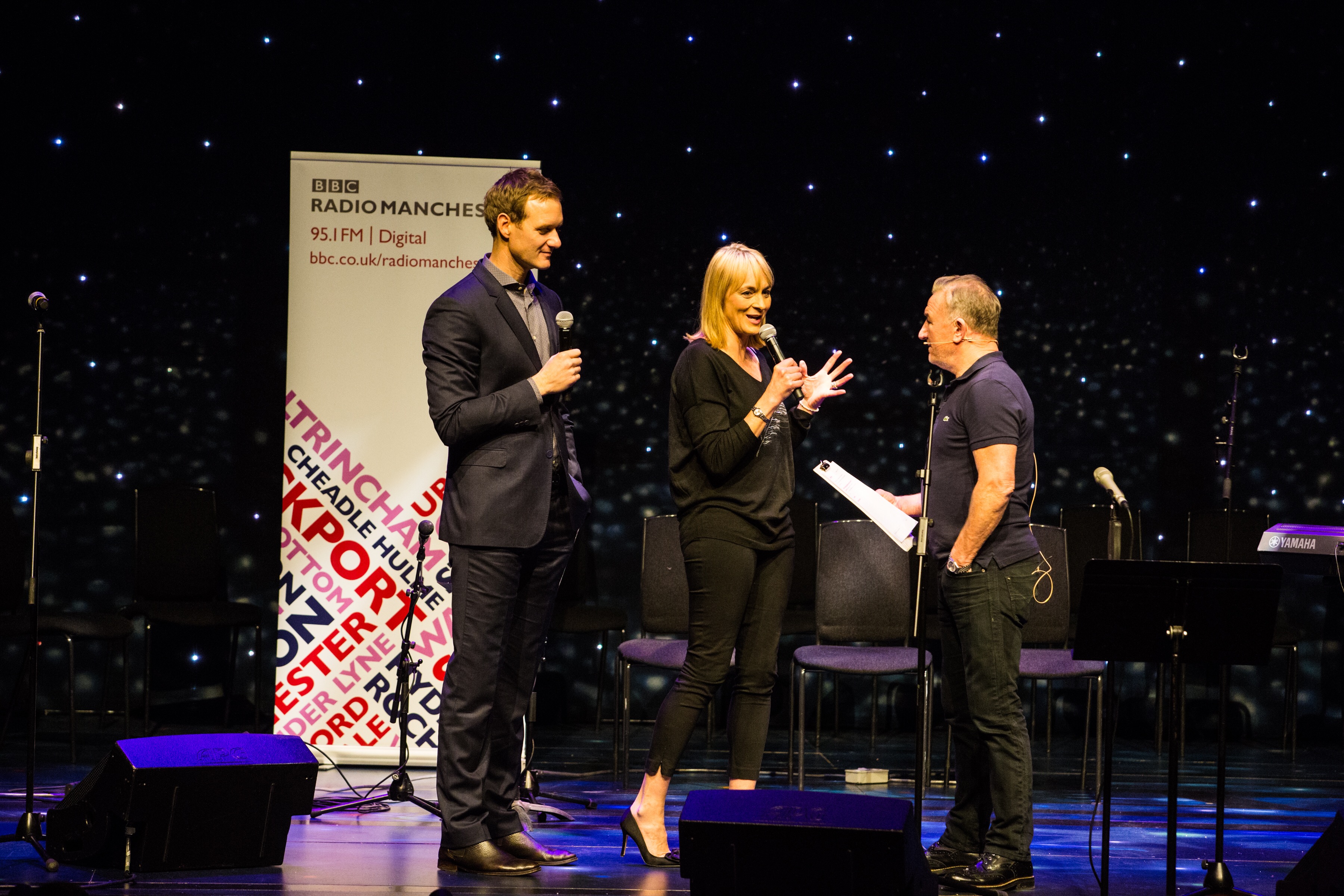 BBC Radio Manchester presenter Mike Sweeney delighted the live audience at The Lowry Theatre yesterday as he compered a morning of live music and comedy from a long list of local talent. Sweeney opened the show singing his own version of the 1960s classic Handbags and Gladrags, made famous by Rod Stewart and The Stereophonics.

A raft of local legends from the worlds of music, comedy and television entertained the crowds for the three hour show. Topping the bill were Salford born Russell Watson who performed ‘Do You Hear What I Hear’ and impressionist Jon Culshaw who had the audience in stitches with his impressions of Donald Trump and tribute to Stockport’s Mike Yarwood.

Other performances came from a raft of local legends including The Bootleg Beatles who sang Help, one of the fab four’s biggest hits; there were seasonal songs from Manchester Music icon Rowetta; and Buzz Hawkins introduced The Bradshaws at Christmas.

And there was also a surprise appearance from Louise Minchin and Dan Walker who swapped the BBC Breakfast sofa for the stage as they joined Mike Sweeney to spread some festive cheer.

Elsewhere on the bill were performances from a local gospel choir The Voice Assembly; singer songwriter Chloe Jones from Dukinfield; and musician Claire Mooney form Levenshulme.

BBC Radio Manchester journalist and jazz singer Anna Geary dazzled the audience with her version of Billie Holiday classic ‘The Way You Looked Tonight’ and Wilmslow’s Liam McClair performed a self-composed song. There were performances from Manchester based singer songwriter Lily Jo and Alice Gasson from Moston along with lots of laughs comedian Toby Hadoke.

The bill was completed with the Mona Lisa Twins and Ashleigh Wood with a haunting version of Joy Division’s ‘Love will tear us apart’.

The three hour festive extravaganza was performed live to a sell-out audience and also broadcast live on BBC Radio Manchester. Proceeds from the tickets sales will be donated to BBC Children in Need bringing the total raised this year by BBC Radio Manchester listeners to almost £30K.

Salford born Mike, who had worked at Salford docks on the same site the Lowry now stands, was blown away by the atmosphere.

Mike says: “It was Mint! It was the first time I’d ever done a show like this on stage and on the radio at the same time, and the icing on the cake for me was raising such a lot of cash for Children in Need. Sorted!”

A Nutcracking Xmas at Spinningfields