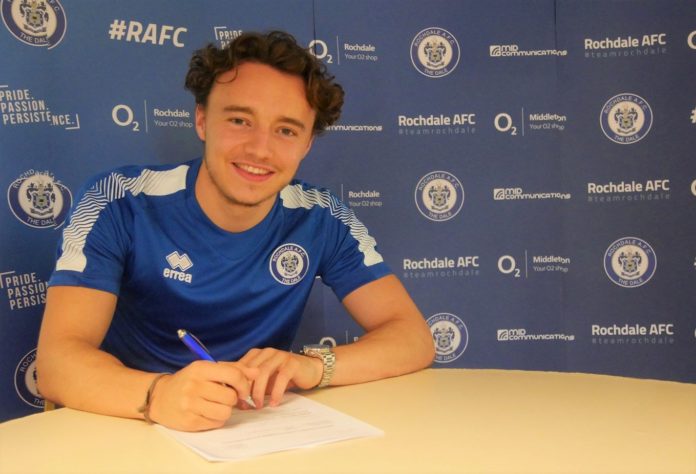 22-year-old Ollie Rathbone has penned a three-year deal, keeping him contracted to Dale until the summer of 2022.

The midfielder, who was out of contract this summer, arrived at the Crown Oil in June 2016 from Manchester United. Since then, he has notched up over 100 Rochdale appearances and scored nine goals.

After putting pen to paper, he commented: “I’m very humbled to have been offered a three-year-deal – it means a lot to me.

“I’ve thoroughly enjoyed my time at Rochdale so far. I’ve made so many brilliant memories with this club and I’m really looking forward to adding many more to ones that I’ve already got.

“I’m really excited to be working under Brian Barry-Murphy. It’s an exciting chapter for the football club, so I’m really looking forward to getting going when pre-season starts later this week.”

Manager Brian Barry-Murphy added: “Ollie is a great signing for us.

“He is going to be an extremely valuable asset to the club. He’s someone who had a lot of suitors outside of the club, so the fact that he has committed to what we want to try and do is exciting. It’s a sign of what we’re trying to do this season.

“Ollie is a special guy, who has a great temperament and a great character. He is hugely revered in the squad as a player whose commitment knows no bounds. His skill level is also exceptional. We see a player who has developed exceptionally well under the previous management team and hopefully I can help that move along.”