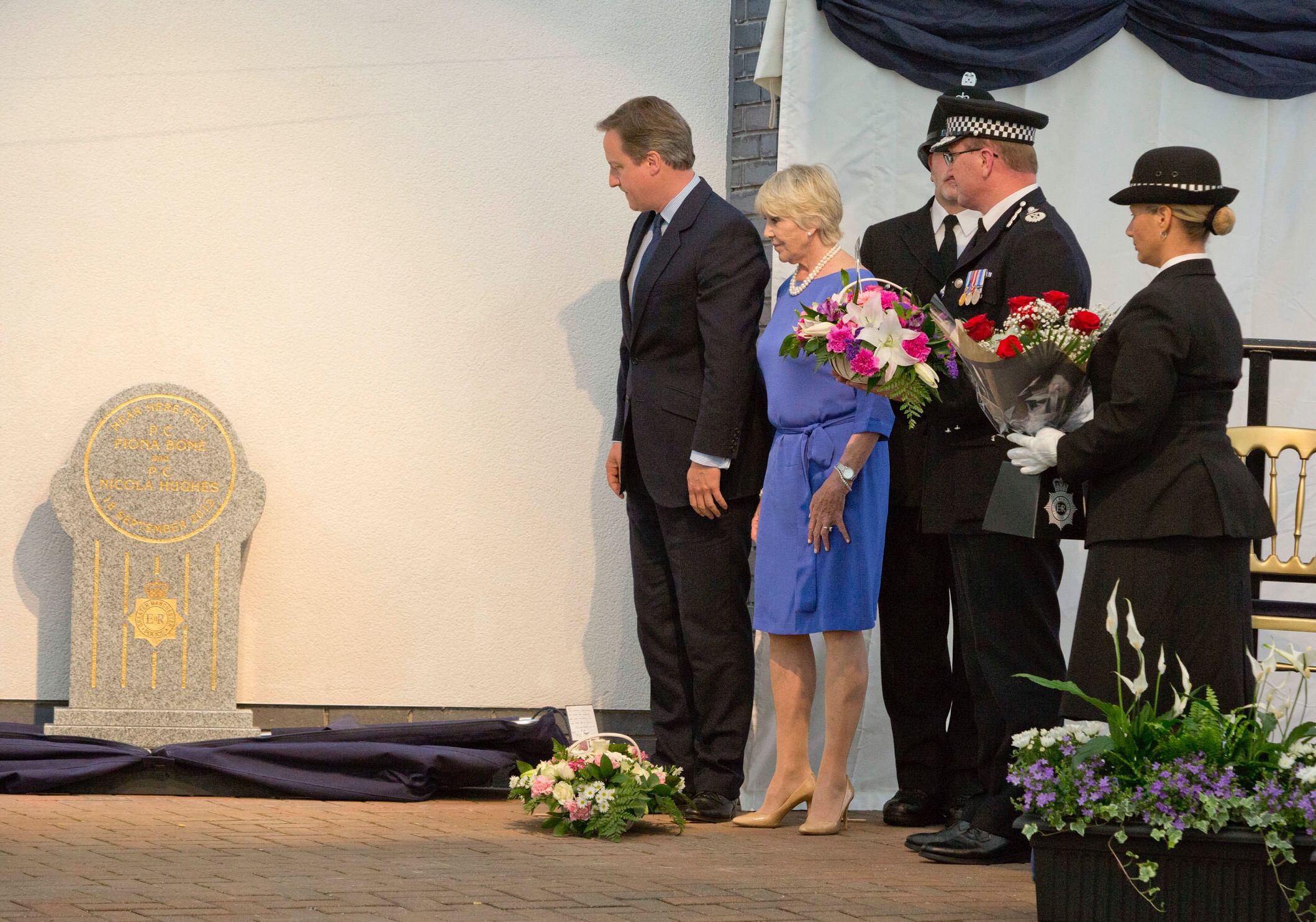 A memorial stone has been laid in Tameside to honour two PCs who were killed whilst on active duty.
The Police Memorial Trust’s 39th national memorial was unveiled by MP David Cameron at a ceremony on 14 July 2016 at the Hub in Mottram, honouring PC Fiona Bone & PC Nicola Hughes, who were brutally murdered whilst protecting the citizens of Mottram.

On 18 September 2012, Fiona and Nicola responded to what they believed was a routine burglary call in Hattersley, but sadly it was in fact a trap set by Dale Cregan, who was wanted by police. He shot the two officers repeatedly before throwing a grenade at them and running away.

The unveiling of the memorial was also attended by Mrs Michael Winner, chairman of the Police Memorial Trust, Chief Constable Ian Hopkins, the families of both officers and their police colleagues together with the local MP and other dignitaries.

The private event started at 3.30pm when the Greater Manchester Police Band played, followed by speeches and the unveiling of the memorial.

PC Bone and PC Hughes are the 46th and 47th officers killed in the course of their hazardous duty that have been honoured by the Police Memorial Trust since its formation in 1984. The first memorial was to PC Yvonne Fletcher in St James’s Square. Michael Winner campaigned for The National Police Memorial to be placed in The Mall at the corner of Horse Guards in London. It is the first major memorial to be placed in the Mall for over 100 years. It was unveiled by Her Majesty the Queen in April 2005. It was designed by Norman Foster.

Since 1984, each memorial has been unveiled by a prominent figure on behalf of the Police Memorial Trust.

This is the fifth Police Memorial Trust memorial stone to be placed in the Greater Manchester area.

The late Michael Winner wrote, “I founded the Police Memorial Trust because it seemed unfair to me that there were memorials to other services who fight and die on our behalf, soldiers, sailors and airman, but there were none for the police. They fight another war that has no beginning and no end and war has its fatalities.”

Mrs Michael Winner agreed to take on Chairmanship of the Trust after Michael Winner’s death, she said: “I am proud to continue in the very worthwhile work Michael started. It is a sad reality that there will always be the need for such memorials to our courageous police men and women. The Trust will never let their sacrifice be forgotten.”

Chief Constable Ian Hopkins from Greater Manchester Police said: “None of us will forget the morning of 18 September 2012 when PC Fiona Bone and PC Nicola Hughes were brutally murdered doing the job they both loved so passionately. For their families and those who knew and loved them, their loss still feels as great today as it did then.

“I would like to thank the Police Memorial Trust for honouring Fiona and Nicola with this memorial. I know that these two brave officers will never be forgotten, but this memorial will act as a permanent reminder of the enormous sacrifice they made. I hope it will be a place where people can pay their respects, but also remember the love, happiness and care they gave to those fortunate enough to have been touched by their all too short lives.”

The Police Memorial Trust is a registered charity which has received donations from Prime Ministers, Home Secretaries, media barons and movie stars as well as hundreds of people who wish to help.

Thousands flock to first ever Festival of Manchester