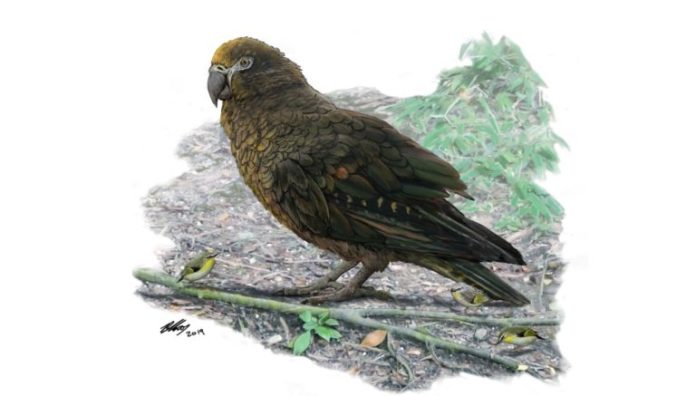 Palaeontologists have discovered the world’s largest parrotstanding up to 1m tall with a massive beak able to crack most food sources.

The new bird which once inhabited New Zealand,has been named Heracles inexpectatus to reflect its Herculean myth-like size and strength – and the unexpected nature of the discovery.

“But until now, no-one has ever found an extinct giant parrot – anywhere.”

The fossil is approximately the size of the giant ‘dodo’ pigeon of the Mascarenes and twice the size of the critically endangered flightless New Zealand kakapo, previously the largest known parrot.

Like the kakapo, it was a member of an ancient New Zealand group of parrots that appear to be more primitive than parrots that thrive today on Australia and other continents.

The new parrot was found in fossils up to 19 million years old from near St Bathans in Central Otago, New Zealand, in an area well known for a rich assemblage of fossil birds from the Miocene period.

Back in its time, before climate cooling affected subtropical forests and vegetation, Heracles probably lived with some 40 other species of birds around the lake.

“It was likely a flightless forager who ate abundantly on fruit and seeds but may have preyed on small animals that it could dig out of logs, or even snack on dead or dying moa – like kea still do with sheep.

“We have been excavating these fossil deposits for 20 years, and each year reveals new birds and other animals,” says Associate Professor Worthy, from the Flinders University Palaeontology Lab.

“While Heracles is one of the most spectacular birds we have found, no doubt there are many more unexpected species yet to be discovered in this most interesting deposit.”

“Heracles, as the largest parrot ever, no doubt with a massive parrot beak that could crack wide open anything it fancied, may well have dined on more than conventional parrot foods, perhaps even other parrots,” says Professor Mike Archer, from the UNSW Sydney Palaeontology, Geobiology and Earth Archives  (PANGEA) Research Centre.

Emperor Penguin population will decrease by more than 50% over the current century says...