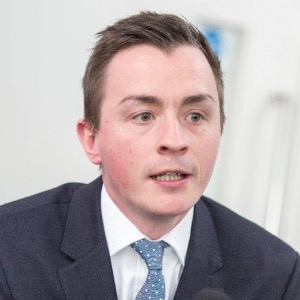 It’s just over a week to go until the Greater Manchester Mayoral Elections.Over the past few weeks we have spoken to the four main candidates and asked them the same six questions.

Over the next four days we’ll be running those interviews in alphabetical order so today it is the turn of Conservative Candidate and current leader of Trafford Council Sean Anstee.

Rising Tory star in the region, Sean was elected as a Bowden Councillor back in 2008 and three years ago, became the country’s youngest council leader at the age of 26. He grew up in a council house in Partington leaving school at 16 to take up an apprenticeship at Barclays, eventually becoming vice president at Bank of New York Mellon in Manchester before taking on the role of council leader following the resignation of Matthew Colledge

We asked Sean first of all what he sees as the major problems in the region.

He replied that while accepting that there are problems we must also look at the region’s strengths.

Among the problems he identified was that of worklessness which stems back to the Industrial decline of the 1970’s and 80’s, something he thinks that is a key problem to address coupled with an economy which is being built as a low wage

Nevertheless the region has, he says a dynamism, 2.7m of some of the most creative and resilient people in the country while the city centre is leading an economic resurgence in the region. The challenge is how does that diffuse out to Greater Manchester as a whole.

The economic model that we have at the moment was one of our later questions but we can deal with it now as Sean has brought it up.

We can’t all have an Airport, we can’t all have a Trafford Park and Sean accepts that the Northern part of the region has not seen the benefits that other parts have.Saying that though he says that the investment in Metrolink will help to alleviate some of that problem and will help give the Bury’s the Oldham’s and the Rochdale’s some of the infrastructure to build on

But back to the issue of trickle down economics, how can we have a model where some of the post deprived communities exist a mere stones through from the city centre lights

Well says Sean, that is the beauty of devolution, no longer can these problems be seen in isolation. He grew up in Partington where it was said that to get a job you needed a car and drive to Trafford Park or the airport.Now the Mayoral powers give the opportunity to work across different areas, linking transport to jobs and health and well being.

So with Manchester’s autonomous health budget beginning with a deficit, how would Sean deal with that as Mayor?

Yes he replies, it’s important that the region gets its fair share of health spending from Westminster but it’s not all about money.

“A third of the people queuing in the NHS don’t need to be there..if you were running a business and costs were higher than they should be, you’d do something about it.”

What devolution does he argues is gives the region the ability to free up the hospitals to deal with what they do best and invest in the initiatives that will mean less people needing to access front line health services.

While the Mayor does not have direct control over health and social care, that will be the responsibility of The Greater Manchester authority, he or she will certainly have an influence on policy and on this Sean would like to see a levelling of the playing field of clinical care, investment in community and social based Care as well as initiatives on health education, sports participation etc.

Devolution is just the start of the process isn’t it?

The risk, says Sean, is that we squander the powers that we have fought for, that we can become paralysed making the same decisions that were being made in Westminster instead of making decisions that are more Greater Manchester centric.

Sean accepts that in the past there have been many areas of Greater Manchester where it was difficult to see how your vote mattered, yet insists that this being a Greater Manchester wide vote meant that this was a different playing field.It was a chance for the voter to connect the issues that matter back to politics and to the election,

Finally then the sound bites-what would Sean do in the first 100 days and what legacy would he leave?

Firstly that the region has a global presence, that we can go out confident in the world especially with us seemingly exiting the European Union (Sean incidently was a remainer)

Secondly that we increase individual wealth in the region, that people feel that they get up in the morning and earn a good wage for a good day’s work, that they have the opportunity for advancement, to retrain and thirdly that everyone has an opportunity for personal advancement

“We have got to make sure that all parts of Greater Manchester feel that they are benefiting from growth, that they are not on the sidelines looking in but are intrinsicly part of the future.”

How Bitcoin and Blockchain Redefine the Structure of Global Trade?

What we all should know about PPE