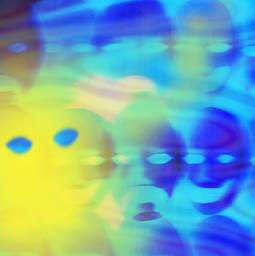 The project’s first EP, I Don’t Want To Play The Victim, But I’m Really Good At It, recorded between London and LA and featuring a raft of musical collaborators, is out in September via Good Soldier Songs / AWAL Recordings.

Debut single ‘My Cheating Heart’ debuted on BBC Radio 1 as Annie Mac’s “Hottest Record” and is available to stream now on all DSPs.

Named after a seminal Pablo Picasso exhibition at the Tate Modern, Love Fame Tragedy sees Murph joined by a variety of friends and collaborators for I Don’t Want To Play The Victim, But I’m Really Good At It, including Pixies’ Joey Santiago, Gus Unger-Hamilton of Alt-J, model and singer Maddi Jean Waterhouse, and former Soundgarden and Pearl Jam drummer Matt Chamberlain.

Love Fame Tragedy will take to the stage for the first time for intimate shows at Arts Club, Liverpool on September 11th, Manchester’s Gorilla on the 12th, London’s Moth Club on the 13th and MAZE, Berlin on the 14th, before touring across the US and Australia throughout September and October. Tickets can be purchased HERE.