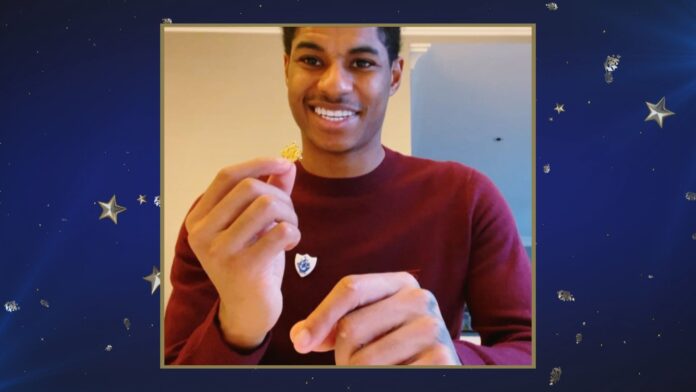 Blue Peter is celebrating the bravest and best achievements of some of its young viewers by awarding them the highest accolade the show can give – the Gold Blue Peter badge – in a special show which also sees Marcus Rashford and Greta Thunberg given the prestigious award.

The Gold badge is the most sought after of all Blue Peter badges with only a small number being awarded each year to people who have accomplished great things, inspired a nation, saved a life or who have shown bravery and courage.

Now Greta and Marcus are both joining the special club. Marcus is being awarded his badge for being a ‘hero not only on the pitch but off the pitch as well’ after the show received numerous letters from kids saying they have been inspired by him, not only because of his football, but also for the way he is making a difference to young people’s lives.

Receiving his badge, Marcus says: “I appreciate it greatly – I am happy that I’m able to spread positive messages and show a side of me that people might not know of. A lot of what I do is not for me, I just want to give people the best chance to be the best they can be.”

Greta is being given her badge for her dedication to raising awareness about climate change and the way she has inspired a generation to make a positive change for the planet.

Greta was thrilled with the award saying: “Thank you so much. I don’t know if I deserve this but I am very honoured by this and I will put this in my room and take great care of it.”

The Blue Peter Gold badge special show will also feature kids who every year achieve incredible things. Presenter Mwaksy says: “Each year we get so many amazing letters from kids at home telling us about the things they have achieved. Some make us laugh and some make us cry so it is fantastic to be able to award some of our viewers a Gold badge.”

Seven-year-olds Ayaan and Mikaeel, who last summer set up a lemonade stand to raise money for children living in Yemen, will be awarded Gold badges as part of the special show which airs on CBBC and BBC iPlayer at 5pm, Thursday 25 February. Ayaan and Mikaeel called their stand ‘Lemonade for Yemen-aid’ and set a target to raise £500 but by the end of just day one, they had raised an incredible £5,000. They went on to receive a donation from Hollywood’s Angelina Jolie and in total have now raised an incredible £100,000.

They will show Blue Peter presenter Adam how to make their lemonade before receiving very special messages from Arsenal’s David Luiz and Manchester United’s Bruno Fernandes and, to top it off, a message from Stormzy who tells them: “I have heard about your incredible lemonade stand and all the amazing work you guys have done. I was blown away… I would love to nominate you for a Gold Blue Peter badge, you are a pair of little legends, wear it with pride because you deserve it.”

Also receiving an award is 12-year-old Holly, who has been raising money for good causes since she was six. When she found out the Eurovision Song Contest was cancelled due to Covid-19, she took it upon herself to run her own song contest to raise money for the NHS. It was called Dollovision and she wrote 41 songs with her dolls and made videos for the seven finalists. Alongside her badge she is surprised by stars of Strictly, including Amy Dowden, and receives a video message from Eurovision commentator, Rylan Clark-Neal.

Archie was 3 when his little brother Stanley was born, but at just two weeks old Stanley became ill and needed a lot of medical care. He had to spend his first year in hospital and then Archie became ill with leukaemia. That didn’t stop him, however, from wanting to raise money for the children’s charities who have helped his family. A massive Harry Potter fan, Archie is surprised with video messages from Rupert Grint and Tom Felton before receiving his Gold badge.

Other winners include Emmie, who is awarded a Gold badge for her volunteering and fundraising efforts and for setting up Emmie’s Kitchen, a charity set up to help and support parents at Royal Manchester Children’s Hospital where she was treated for leukaemia.

Six-year-old Tony, inspired by fellow Gold badge holder, the late Captain Sir Tom Moore, raised £1.6m for a local children’s hospital, despite only having learned to walk last year; and Steffan also receives a Gold badge for helping to save the lives of five people, when he was only eight years old, by alerting the coastguard after he noticed people stuck on the rocks with the tide rising.

Ellen Evans, Editor, Blue Peter, says: “The Blue Peter Gold Badge Awards is a feel-good show about the extraordinary things that young people achieve. Each year only a few Gold badges are awarded to our amazing audience who have shown outstanding bravery, overcome adversity and achieved the most brilliant things. It’s so difficult to choose who is awarded a badge and I hope that Archie, Holly, Tony, Emmie, Steffan, Ayaan and Mikaeel inspire others with their stories as both Greta and Marcus have done.”

Blue Peter is on CBBC and BBC iPlayer at 5pm on Thursdays.

Universal Credit has helped take benefit payments to their lowest since 1948, finds IPPR