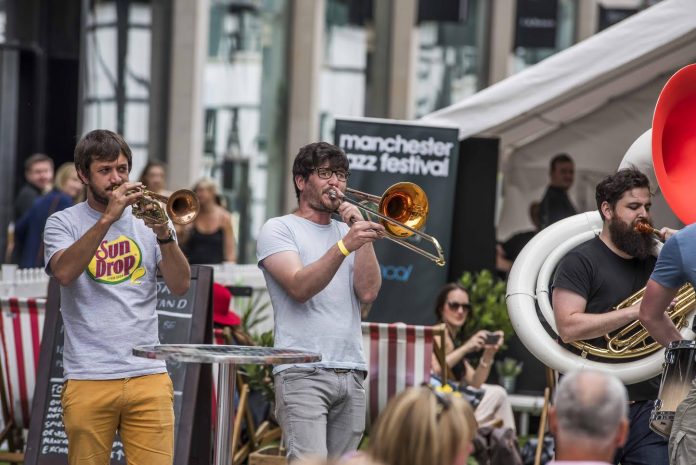 School’s out for summer at the end of this month and to celebrate, Manchester’s Business Improvement District, Manchester BID, is bringing together the best of the city’s summer festivals for a weekend filled with food, music, entertainment and shopping.

From Friday 28 July to Sunday 30 July The Manchester Picnic, manchester jazz festival and the city’s first Clownfest will be taking over Exchange Square and St Ann’s Square alongside garden bars and street entertainment across the city’s shopping district.

The Manchester Picnic, returning for its seventh year, will be serving a selection of the city’s finest street food alongside tastings and demos from 10am-6pm each day in St Ann’s Square. Kick back and relax in a deckchair and soak up music from the main stage courtesy of manchester jazz festival.

Check out Flourish’s flower market and bring the kids to The Welcoming Picnic – immersive children’s theatre and summer fete by Z-Arts, inspired by their recent Manchester International Festival show.

Clownfest Manchester, fresh from London and with many acts en route to the Edinburgh Festival, will see some of the UK’s top clown influenced performers spread mirth and laughter across the city.

The festival will take place in a unique Omnitorium – a 100 seat vaudevillian tent – erected in Exchange Square outside Selfridges. In and around, will be performances for all, including family shows, activities and walkabout street theatre and shows for adult audiences in the evening.

St Ann’s Square and neighbouring retailers including Rapha, Lululemon, Paperchase, Lunya and The Whisky Shop will also be celebrating summer in the city, with a pop-up coffee cart, al fresco delistand, special tastings and in-store events.

2017’s street food line up won’t disappoint with classic woodfired pizza from I Knead Pizza, fusion tacos boasting world flavours including Chinese, Indian and Jamaican, alongside the classic Mexican at No Tacos and eat in or stock up at Spanish tapas bar and deli, Lunya.

Grab something sweet from The Waffle Shack or the purveyor of Manchester’s tastiest gourmet ice cream Ginger’s Comfort Emporium. A bar serving a selection of local beers, gin and prosecco will be in residence, and if you need a caffeine fix, the city’s finest cycling apparel store and coffee stop, Rapha, will be bringing its cute camionette, serving coffee, tea, soft drinks and cakes.

manchester jazz festival (which runs from 28 July – 6 August) will be taking over The Manchester Picnic’s stage, entertaining shoppers with free gigs and fun jazz vibes for everybody to enjoy. In-between performances there will be food and drink tastings and masterclasses from Manchester BID’s best eating and drinking spots including The Whisky Shop and Lunya, as well as hands-on activities such as cocktail making.

May half term at Dunham Massey