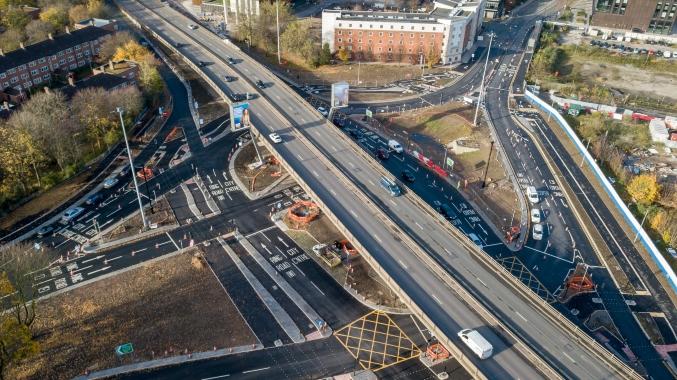 A £9m scheme to radically improve a major city centre junction for all road users has reached a new milestone.

The former Princess Road / Medlock Street roundabout beneath the Mancunian Way has been transformed by creating two new link roads – allowing direct access to the city centre and Mancunian Way from Princess Road – and the junction now has new and improved crossings for people on bikes and on foot.

The improvements made to the junction will allow traffic to move through the junction more effectively while creating a safer environment through the introduction of fully segregated walking and cycling facilities.

Work has included replacing the previous network of underpasses with upgraded, safer crossing points for cyclists and pedestrians, widening a slip road, plus tree planting to create a more pleasant environment.  In total, the council has committed to planting 160 new trees and more than 14,000 plants, plus around 1,500sq m of new turfing and 2,800 sq m of wildflower seeding.

Landscaping work, which is set to be carried out in the coming weeks, will be the final element of the scheme to be completed.  Following engagement with residents, the scheme was amended to ensure that local green space was protected and enhanced.

As part of the council’s commitment to providing social value through its major projects, four full-time jobs and seven apprenticeships were created for local people, with more than 85 per cent of the scheme’s labour and supply sourced from within Greater Manchester.   The scheme also generated new investment into St Philip’s C of E Primary School, with lead contractor COLAS contributing to the installation of a new CCTV system, plus resurfacing the school’s car park and providing safety-awareness training for pupils.

Chris Boardman, Cycling and Walking Commissioner for Greater Manchester said: “This route now provides a safe, fully segregated and direct route from Hulme and the University campus into the city centre. It’s also much more pleasant than before as it is at ground level with added green space. I hope it is a popular route for getting into the city centre as well as everyday trips to school and shops.”