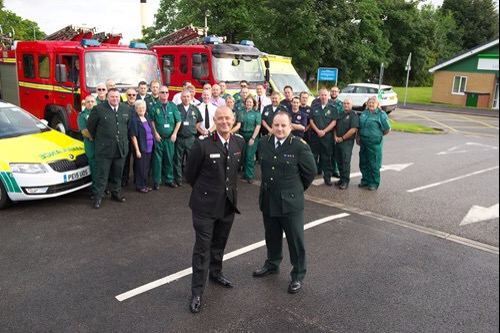 In a ground making move Greater Manchester’s Fire Rescue crews will now be helping to deliver life-saving care for cardiac arrest patients as part of a new joint initiative with North West Ambulance Service (NWAS).
From today, when a person dials 999 to report a suspected cardiac arrest (a condition where the heart stops pumping blood around the body because of a fatal abnormal heart rhythm), both North West Ambulance and Greater Manchester Fire and Rescue will respond and whoever reaches the casualty first will start providing life-saving treatment before ambulance crews can take over.
Once the patient has been stabilised, they will then be conveyed to hospital by ambulance.

The scheme works in a similar way to the Trust’s volunteer Community First Responder scheme, where trained members of the public are despatched to life-threatening emergency calls within their local community.

The added advantage to despatching fire crews, is their ability to respond on blue lights therefore arriving more quickly to a situation where literally every second can mean the difference between life and death.
Fire crews will be paged by NWAS when a suspected cardiac arrest is reported within three miles of the fire station and despatched at the same time as an ambulance.

Once the ambulance crew arrives, advanced life support will commence and the patient will be handed into the care of NWAS.
North West Ambulance Service, Director of Operations, Derek Cartwright comments: “This is an extremely positive project and it’s great to work with GMFRS on a scheme that will contribute to saving lives here in the Greater Manchester.
“The chances of survival from cardiac arrest diminish rapidly with every passing second so the sooner someone can receive treatment, the greater their chances are of leading a full and healthy life afterwards. It doesn’t matter who gives that treatment – whether it is a member of the public, an ambulance crew or a fire crew so the more resources there are available to respond, the better for those who suffer this potentially devastating condition.
“Last year, the ambulance service responded to 5,486 incidents in Greater Manchester where the patient had suffered a cardiac arrest – sadly, despite everyone’s best efforts, not everyone survives but everyone deserves that chance and this is what this scheme will give people.

“Our firefighters already work closely with NWAS, they are trained in CPR and the use of life-saving equipment such as defibrillators, and in fact have already saved lives through their intervention.

“This seems a logical way to develop that further – and after all, if we could do more to help NWAS save even more lives, why wouldn’t we make that happen?”
From 12pm today, callers who report a suspected cardiac arrest may be initially attended to by fully trained fire crews as well as an NWAS crew.

The milestone was marked with a launch event attended by County Fire Officer and Chief Executive of GMFRS Peter O’Reilly and NWAS Head of Service Steve Hynes, along with staff from both GMFRS and NWAS at Highfield Ambulance Station in Farnworth.

Salford starts process to become a City of Sanctuary