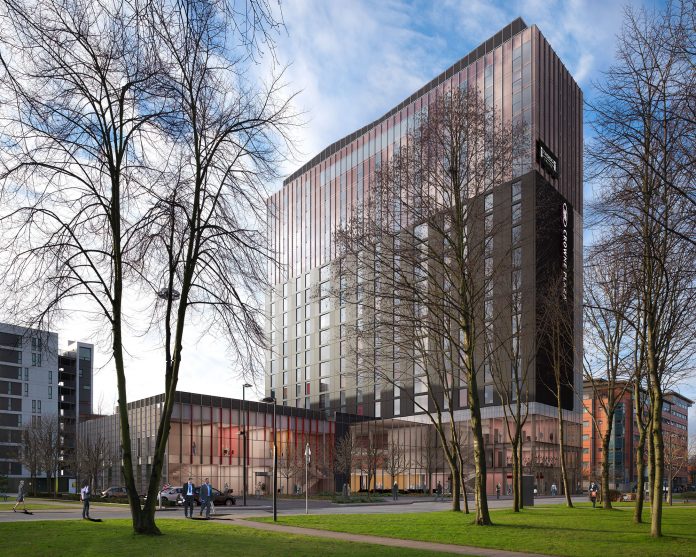 The first dual-branded hotel under one roof in the north of England is on course to open early next year in Manchester,after its newly appointed management team took part in a topping out ceremony.

Containing 328-rooms the dual-branded Crowne Plaza and Staybridge Suites – known as a ‘double pack’ concept – is located on Corridor Manchester and will be unveiled to the public in early 2018.

The 19-storey building, just off Manchester’s bustling Oxford Road and within walking distance of the city centre, will boast a 212-room Crowne Plaza and a 116-room Staybridge Suites.

Crowne Plaza, which will feature a 120-cover upscale restaurant, seven meeting rooms catering for over 200 delegates and a gym, is spread over 11-storeys from the ground up.

Whereas extended stay brand Staybridge Suites – which is opening in Manchester for the first time – is located on the upper eight floors and will offer a warm, social and home-like environment through a mix of studio and one bedroom suites. Both brands are part of the IHG portfolio.

Andrew Fletcher is General Manager of the dual-branded hotel, which is the first of its kind in the north of England and sits opposite Alliance Manchester Business School and The Royal Northern College of Music.

Melanie Thompson, formerly of The Lowry Hotel, will be the dual-branded hotel’s Director of Sales and Marketing while Heather Tsopanou and Rebecca Unsworth have been appointed as Revenue Manager and HR and Training Culture Coach respectively.

Andrew said Manchester is following in the footsteps of great cities across the globe that have incorporated dual-branded hotels in their offer.

“After topping out the building we are delighted to now announce that the Crowne Plaza and Staybridge Suites will open under one roof early next year,” said Andrew, who has 20 years of experience in the hospitality industry.

“The dual-brand double pack concept is extremely exciting as it isn’t something that has been offered to people staying in Manchester before.

“Being located just off Oxford Road, within Corridor Manchester and next to the Alliance Manchester Business School on the University of Manchester campus, gives us tremendous confidence in our offer.

“We are very different to any other hotel in the city region. What we have is two brands that very much complement each other and ultimately give people different options to what they have had before.”

The dual-branded 328-room hotel forms part of the University of Manchester’s Campus Masterplan, which includes the wider redevelopment of Alliance Manchester Business School. It will also adjoin its new two-storey Executive Education Centre, which will provide a new home for the business school’s corporate leadership and management programmes.

Both Crowne Plaza and Staybridge Suites sit within Corridor Manchester, which is home to 70,000 students and boasts a workforce of 60,000 people – with 14,000 new jobs planned.

The 116 rooms in Staybridge Suites all have fully equipped kitchens and great views of the city. Guests also have access to a terrace on the 18th floor, a meeting room, fitness room, laundry facilities and complimentary hot and cold buffet breakfast in a hub kitchen.

The 120-cover upscale restaurant in the 212-room Crowne Plaza hasn’t been named yet, but Staybridge Suites guests will be able to access the restaurant and bar.

Andrew said: “We are currently undertaking a recruitment push for both full-time and part time staff as excitement ahead of the opening grows.”

He added: “Myself, Melanie Thompson, who is hugely experienced and has a proven track record of successfully driving sales, and other senior staff including Heather and Rebecca, are truly looking forward to welcoming leisure visitors, short-stay business clients, long-stay business clients, entrepreneurs, academics and those visiting the universities to the Crowne Plaza and Staybridge Suites.

“The dual-branded hotel is in the unrivalled district that is Corridor Manchester and we are delighted to be opening a hotel here.” 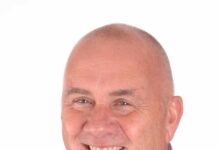 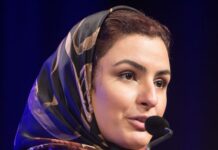 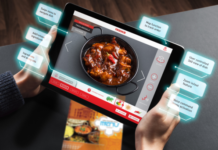 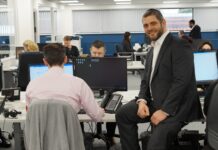 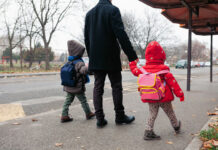 Merger of web food ordering platforms given the go ahead