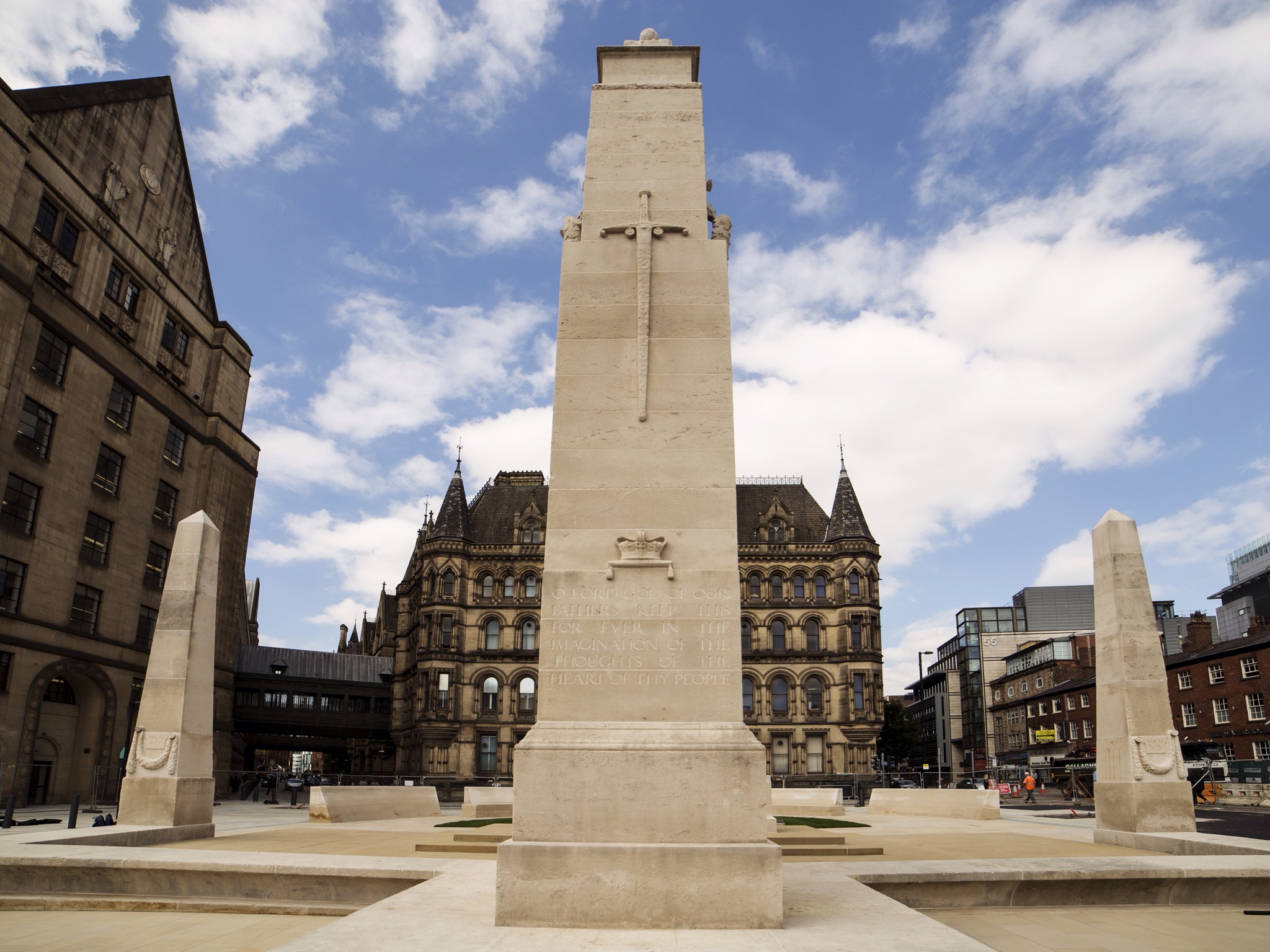 Manchester City Council have announced that the relocation of the cenotaph from St Peter’s Square to its new location in front of the Cooper Street entrance to the town hall has been completed.

Edwin Lutyens memorial to the First World War was moved to the other side of St Peter’s Square and relocated to the corner of Princess Street and Mosley Street to accommodate Manchester’s second Metrolink crossing and enable more space to be opened up for public use outside Central Library.

Development works to the new cenotaph site were started in January working closely with heritage and conservation specialists – as well as full consultations with veterans’ groups and church authorities – and received broad support for the relocation.

Portland stone has been used to match the stone used when the cenotaph was originally designed by Sir Edwin Lutyens. As a precious artefact, replacing stone has been kept to a minimum to retain the historical value of the original – and expert carvers have re-cut weathered lettering and conservation works have been carried out to museum standard to preserve the intended vision for the memorial.
Two types of Portland stone were eventually chosen for the new cenotaph site – with harder Portland stone (Perryfield Whitbed) chosen for areas such as the top of the seating that will cope better under weathering, while a softer variety (Jordans Basebed) was chosen for area that may one day be carved.

Two further stone types were also used in the design: Crossland Hill York stone for the pavings and steps; and Burlington Slate for the out edging.

The new design has been heavily influenced by Lutyens’ original, and wider, design for the cenotaph area in St Peter’s Square – which was changed after World War Two to integrate a garden area – incorporating a wide elliptical seating area, providing an area of quiet contemplation.

Fencing will remain surrounding the new cenotaph until public realm works in St Peter’s Square in front of the refurbished Town Hall Extension and Central Library are completed at the end of September.

Coinciding with the completion, a service will be held to mark the sensitive relocation of the cenotaph in October.

The St Peter’s Cross, which marks the location of the demolished church once on the site, will be placed in storage and returned when the works are completed.

Sir Richard Leese, Leader of Manchester City Council, said: “In moving the cenotaph we have finally realised a truly distinctive area of the city centre that is fitting to the memorial and a real tribute to those who have made the ultimate sacrifice for our city and our country.

“Respect for what the cenotaph represents has always been central to these plans and we thank the veterans’ and heritage groups for their input. The completion this week will allow veterans and members of the public enough time to familiarise themselves with the new cenotaph ahead of the 2014 Remembrance Sunday commemoration in November.”

The architect for the new Manchester cenotaph was Stephen Levrant Heritage Architecture Ltd.