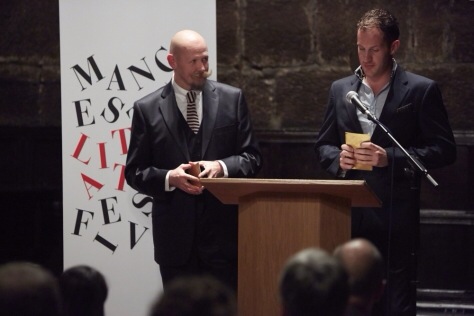 THE winners of this year’s Manchester Writing Competition have been announced.

Two joint winners of the poetry section of the award, Michael Hudson and Mona Arshi, shared the first prize cheque for £10,000, while Martin Macinnes was the sole winner of the fiction side of the award, also bagging £10,000.

Martin, who lives in Edinburgh, said: “I’m astonished and humbled to have won, especially so given the outstanding quality of the stories shortlisted and highly commended. I’m struggling to accommodate it – this is the biggest moment of my life, extraordinary validation of my obsessions.”

“I’ve worked part-time on near minimum wage for seven years, solely to give reasonable time and space to writing, and to reading. I’ve struggled, badly at times, but persisted, because writing is the one thing I want to do, the most important thing I can imagine.”

On winning the poetry prize, Mona, a former lawyer for the human rights organisation Liberty, said: “I’m really overwhelmed, I am just really grateful that the three judges liked the poems enough and what is really great is that it is a really special competition because you don’t just send in one poem – I sent in five poems. It gives you a real range and opportunity to show them a cross-section of your work and they liked it enough and that has given me such a boost to my confidence.”

Michael Hudson, who lives in Indiana, said: “I am overwhelmed and astonished. I am feeling quite bedazzled at the moment, and in the throes of some really embarrassing Anglophila. I may even give soccer another chance (I already love Philip Larkin).”

Since its launch in 2008, Carol Ann Duffy’s Manchester Writing Competition has attracted almost 12,000 submissions from over 50 countries and awarded more than £75,000 to its winners.

The competition was designed to encourage new work and seek out the best creative writing from across the world, establishing Manchester as a focal point for a major international prize.