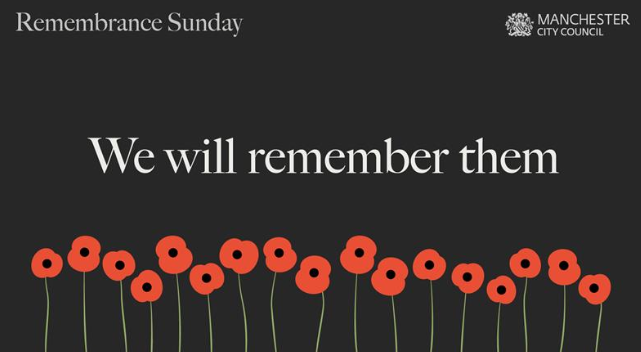 Manchester will fall silent as the city remembers the fallen during the annual Remembrance Sunday commemoration that will take place on Sunday 14 November 2021.

Civic dignitaries, servicemen and women, service and ex-service organisations, faith leaders and uniformed organisations will be invited to pay their respects at the city’s Cenotaph in St. Peter’s Square.

At 11am there will be a two-minute silence. The start and finish of the traditional silence will be marked by the firing of a 105mm gun. The event will be live streamed through the following link: https://vimeo.com/642089343.

After the Parade has left the Cenotaph, the barriers will be removed, and members of the public will have an opportunity to place their tributes around the memorial.

We would like to invite veterans who would wish to take part to email Manchester City Council: civicevents@manchester.gov.uk

The Lord Mayor of Manchester, Councillor Tommy Judge, said:
“At the service we will pay tribute to those who have died protecting our country and reflect on past and present conflicts.

“After cancelling last year’s ceremony due to Covid restrictions, it’s important that the people of Manchester come together to show our combined appreciation for the armed forces.

“It will be an honour to mark this solemn day with the people of Manchester.”