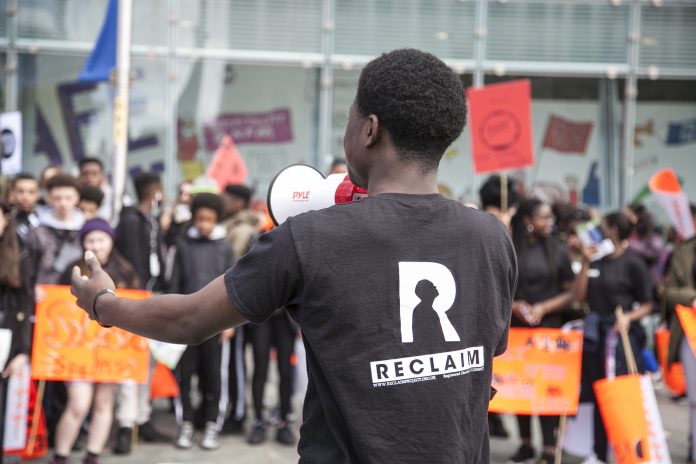 “We can’t vote but we matter”: on election day Manchester teenagers take to the streets to demand a voice.

Activists from the UK’s first under 18s political campaign group, Team Future,  will take to the streets of Manchester this Thursday afternoon to protest youth political exclusion and urge older members of the public to use their vote.

As polling day unfolds young people from the Team Future youth collective age 14-17 will demonstrate outside Manchester town hall, where votes from the city will be counted later that evening.

Holding banners highlighting the issues faced by today’s young people the demonstration aims to highlight the democratic blackout faced by UK youth and demand a radical shakeup in the political process to embrace the voice of young citizens.

A statement to be posted on the group’s Facebook page reads:

This election, as always, has seen young people talked about – but never to. We can’t vote so as far as politicians and media are concerned we are invisible. We’ve seen sound-bites, U-Turns, political leaders failing to turn up to debates – but no genuine action to ensure young people’s voices and interests are recognised. Team Future is lead by working class young people from communities on the frontline of many of the UK’s most pressing issues. On education, mental health, public services, we have valuable opinions and ideas, but we are considered irrelevant to the debate. Instead of wasting time on lazy stereotypes it’s time for politicians to combat the systems that keep many young people alienated and excluded from politics, often long past their 18th birthday, and our interests sidelined. Team Future is done waiting around for change: we are building a movement of young people who know their true power and will work together to fight for the more honest, representative and inclusive political system that our society needs.

Team Future was started by young people from the Manchester-based youth leadership and social charity, RECLAIM .

A manifesto they have produced based on their survey of over 4000 young people around greater Manchester, cites four key demands for politicians in this election and beyond.

Cara, 14 from Moss Side said:
Politics is becoming frail because it’s relying on one type of person. When you see so few politicians that look or sound like you and so many Eton and Oxbridge educated people holding the top jobs in government it takes its toll. How can people who have never walked in our shoes or had real experience of living in our communities know what is best for us?

It’s election day so we are demonstrating to raise our voice and encourage people who CAN vote to take our futures into account.

Just because we can’t vote, doesn’t mean we don’t care. Working class young people like me are experts on the big issues affecting our society and have valid opinions on what a better future looks like.

Lots of young people feel scared to talk about politics and it’s no wonder. At schools we are not learning the skills to criticise, question and challenge the messages we are getting and be confident in our views. How are you supposed to tick a box when you don’t know the reason you’re doing it or who you’re doing it for? Instead of lazy stereotypes it’s time to give a real political education to all young people so we can build the democracy we all deserve.