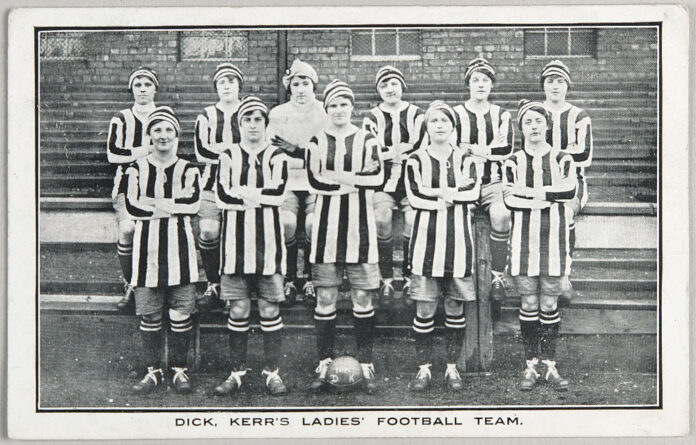 An exhibition charting the history of women’s football will help kick off a summer-long celebration of the game as Manchester prepares to play its part as a host city for UEFA Women’s EURO 2022 tournament matches.

Manchester is one of nine tournament host cities taking part in a National Lottery funded project this summer to uncover more of the hidden history of women’s football in what will be a celebration of the game, its players, and communities.

The city council is teaming up with the National Football Museum, based in Manchester, to help reveal and celebrate the history of the women’s game – first played professionally 141 years ago – and to record more of the stories of the pioneering women and girls involved.

As well as an exhibition that will trace the roots of the women’s game from its early nineteenth century beginnings through to the twenty-first, a unique ‘contemporary collecting’ project is also planned.

The Football Heritage Collection project will see volunteers go out into local communities to speak with people and ‘collect’ their memories and stories about the game and the women involved, along with any artefacts relating to the game or the women who played it.

It’s hoped the project will help reveal even more insights into the long tradition of women’s football in Manchester, which dates from humble origins through to the great Manchester Corinthians’ ground-breaking international tours in the 1950s, right up to the present-day era, led by Manchester City Women and a growing number of female clubs, teams and coaches.

Councillor Luthfur Rahman OBE, Deputy Leader Manchester City Council, said: “As a city that is synonymous with football we’re excited and proud to be playing our part in supporting the UEFA Women’s EURO 2022 Tournament.

“It provides a huge opportunity for girls and women’s football in Manchester and for helping get more girls and women involved in physical activity as part of a healthy lifestyle.

“As well as giving fans the chance to see some of the best players in the world in action on the pitch, the work we’re doing with the National Football Museum to open up and reveal more of the history of women’s football will ensure that this fascinating, surprising, and currently little-known about heritage of the game is opened up to a wider audience, and recorded for future generations to explore, learn from, and be inspired by.”

The National Football Museum has been improving its representation of women’s football across its collections and exhibitions over the past few years and a brand-new large-scale exhibition celebrating and documenting the history of the women’s game will go on display at the museum from February – July, as the city prepares to welcome the UEFA Women’s EURO 2022 tournament.

The exhibition will be supported by an exciting range of activities and events to celebrate and capture the tournament, including the Football Heritage Collection project which will help the museum expand its collection and capture memories from fans and players – past and present – about the history of the women’s game in Manchester.

As part of the project ten community volunteers will be recruited and trained in techniques to gather, record, and digitise oral histories. Volunteers will also support several community collecting days held at fan-zones on match days which will give members of the public the chance to share their women’s football memorabilia and stories with heritage experts. As well as providing valuable information for the museum, the collecting days will help people to learn more about women’s football, and to be inspired by the game.

The heritage collection project will work directly with community and grassroots partners and will be accompanied by interactive sessions and resource packs about the history and importance of the women’s game, as well as family activities in the fan-zones.

A selection of the objects, oral histories, and stories that are collected will be showcased on the National Football Museum website.

Belinda Scarlett, Women’s Football Curator at the National Football Museum, said: “From the Manchester Corinthians’ ground-breaking international tours in the 1950s, to being home to two WSL teams and grassroots teams like Manchester Laces, Manchester has played an important role in the history and development of the women’s game. The National Football Museum has been improving its representation of women’s football across its collections and exhibitions over the past few years culminating in our exhibition to celebrate the UEFA Women’s Euros 2022. The exhibition will be supported by an exciting range of activities and events to celebrate and capture the tournament.”

Nine UEFA Women’s EURO 2022 tournament host cities nationally are taking part in the heritage activity programme to reveal, share, and celebrate 141 years of women’s football. The programme has been funded by a £500,000 grant from the National Lottery Heritage Fund and is in partnership with the Football Association.

Green light given for Wigan to Bolton rail electrification

Millions of rail passenger journeys delayed in the past year