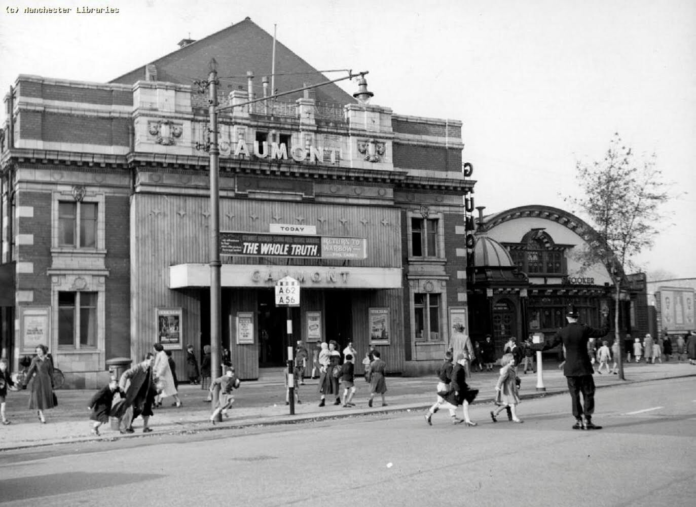 The Co-op has offered the Chorlton Community Land Trust more time to deliver the proposed community-based redevelopment of the Funeralcare building in Chorlton once the Gaumont cinema where the Bee Gees first performed.

The Co-op have accepted the CLT’s published offer of £2.2m on the basis that the final proposal delivers the key community elements that the CLT have stated.

The Co-op will work with the CLT during this period as they develop their proposal which involves retaining the former Gaumont Cinema .

If a sale to the CLT does not proceed, The Co-op will go ahead with alternative development plans for the property.

Steve Goslyn, Chorlton CLT Chair said, We are delighted with this outcome, and look forward to working with the Co-op and the Chorlton community to bring together a wide range of entrepreneurial and creative talents to fully realise our vision for the old Gaumont Cinema to be transformed as the heart of our community.

A spokesman for The Co-op said; “Throughout this process, we’ve looked to ensure an outcome which would benefit the community and a solution for the site which is deliverable and sustainable. The Co-op is a different kind of business with community and sustainability at our core and, contrary to some reports, the sale of our Funeralcare building was never just about achieving the best financial value for our members. We are pleased, therefore, to announce a way forward with Chorlton CLT, that we hope will ensure the use of the site in the future that will benefit the local community.”

The Gaumont first opened as a cinema in 1920 and was called The Picture House until the following year when it was renamed the Savoy Cinema. In 1928 it became one of the original cinemas to be part of the Associated British Cinemas (ABC), and it was not until 1946 that it was taken over by Gaumont/PCT and became The Gaumont.

In 1955 the Gibb brothers and family moved to Chorlton-cum-Hardy, which was the hometown of their father, Hugh Gibb. They lived on Keppel Road and attended Oswald Road Primary School.

The Gaumont was a cinema/venue and was close to both the school and the Gibb home.

During their time in Chorlton, the Gibb brothers formed their first band The Rattlesnakes, a skiffle-influenced rock and roll group started by Barry, with the younger Robin and Maurice joining as vocalists, and heir friends Paul Frost (drums) and Kenny Horrocks (tea-chest bass) being later additions.

Their debut public performance took place here at The Gaumont in 1957 and included a cover of ”Wake Up Little Susie” by The Everley Brothers.

The #StayinAlive crowdfunding website is now up and running. Follow the link below for the campaign video, more information and to make a pledge:
https://www.stayinalive.org.uk/?fbclid=IwAR1Mg5k1VINjoP3kJjIWpPnSH19r7Omq-WP-EdtliRIcxCm9M0h-0ogPoKY